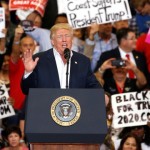 A Champion of the People or Wall Street? Trump Pushes to End Dodd-Frank & Consumer Protection Agency
As the Trump administration enters its second month, Republican lawmakers have begun a legislative attack on the Consumer Financial Protection Bureau, which was created in response to the economic crisis a decade ago. The bureau was created under the Dodd-Frank legislation, which is also coming under attack by Republican lawmakers and the White House. Last week, President Donald Trump signed an executive order to repeal a Dodd-Frank anti-corruption measure requiring oil and mining companies to disclose payments to governments. He has also vowed to chip away at other parts of the legislation.

Black Edge: New Yorker’s Sheelah Kolhatkar on Wall Street’s Biggest Insider Trading Story in History
According to a Bloomberg investigation, the general counsel for Steven Cohen’s infamous investment firm oversaw some of the Trump transition team’s staff picks for the Justice Department in November. Cohen’s firm, SAC Capital, was the subject of one of the biggest insider trading investigations in Wall Street’s history. This fascinating history is chronicled in New Yorker staff writer Sheelah Kolhatkar’s book “Black Edge: Inside Information, Dirty Money, and the Quest to Bring Down the Most Wanted Man on Wall Street.”

A Message to Trump from a Swede: My Real Concern is Rise of Militant Anti-Muslim Neo-Nazis, Fascists
President Trump is doubling down on his false claim that Sweden is struggling with immigration-related security problems, after he faced widespread criticism and ridicule for appearing to invent a terrorist attack in Sweden. Former Swedish Prime Minister Carl Bildt responded to Trump’s claim by tweeting, “Sweden? Terror attack? What has he been smoking? Questions abound.” There has been one recent terror attack in Sweden: Three neo-Nazis attacked a Gothenburg asylum center in January with a homemade bomb. One person was seriously injured. According to The Independent, the suspects were members of the Nordic Resistance Movement, which opposes non-white immigration to Sweden.

#StopTrump: Protests Erupt Across Britain as Lawmakers Debate Canceling Trump’s State Visit
Nearly 2 million Brits have signed a petition calling on President Trump’s official state visit to be canceled. On Monday, thousands of protesters gathered outside Parliament in London as British lawmakers debated whether to deny Trump a formal state visit. Asad Rehman of Friends of the Earth International spoke at the protest in London yesterday.