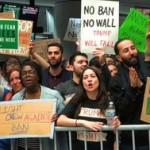 The Supreme Court handed a victory to Donald Trump Monday, when it allowed his latest travel ban to go into effect even as legal challenges continue in lower courts. The administration can now fully enforce its new restrictions on travel from eight countries, six of them predominantly Muslim.

ACLU Vows to Keep Fighting as Supreme Court Allows Trump’s Mostly Muslim Travel Ban to Take Effect
The Supreme Court handed a victory to President Donald Trump Monday, when it allowed his latest travel ban to go into effect even as legal challenges continue in lower courts. The administration can now fully enforce its new restrictions on travel from eight countries, six of them predominantly Muslim. The ruling will bar most citizens of Iran, Libya, Syria, Yemen, Somalia, Chad and North Korea from entering the United States, along with some groups of people from Venezuela. Lee Gelernt is an ACLU attorney who presented the first challenge to Trump’s travel ban order, resulting in a nationwide injunction.

Native American Tribes Join to File Historic Lawsuit Against Trump Attack on Bears Ears National Monument
Five Native American tribes have joined to file what they are calling an historic lawsuit against President Donald Trump, Interior Secretary Ryan Zinke and several other members of the administration. The move came just hours after Trump visited Utah Monday, where he announced his plan to open up protected federal lands to mining, logging, drilling and other forms of extraction. The plan calls for shrinking the 1.3 million-acre Bears Ears National Monument by more than 80 percent and splitting it into two separate areas. Trump would slash the state’s 1.9 million-acre Grand Staircase-Escalante National Monument by 50 percent. Bears Ears National Monument was created in 2016 by then-President Barack Obama. President Bill Clinton created the Grand Staircase-Escalante National Monument in 1996. The national monuments were designated under the century-old Antiquities Act, a law meant to protect sacred sites, artifacts and historical objects. Regina Lopez-Whiteskunk is a member of the Ute Mountain Ute Tribe and former co-chair of the Bears Ears Inter-Tribal Coalition. Bob Deans is director of strategic engagement at the Natural Resources Defense Council.

Honduran Riot Police Refuse to Carry Out Crackdown on Opposition Protests After “Illegal” Election
National police in the Honduran capital Tegucigalpa—including elite U.S.-trained units—refused to impose a nighttime curfew Monday night that was ordered by incumbent President Juan Orlando Hernández after days of protests over allegations of fraud in the country’s disputed election. The move comes after at least three people were killed as Honduran security forces opened fire on the protests Friday night in Tegucigalpa. Protests erupted last week after the government-controlled electoral commission stopped tallying votes from the November 26 election, after the count showed opposition candidate Salvador Nasralla ahead by more than 5 percentage points. The commission now says Hernández has pulled ahead of Nasralla, by 42.98 percent to 41.39 percent, after a recount of suspicious votes. This comes as Nasralla and international observers are calling on the Honduras electoral commission—which is controlled by President Hernández—to carry out a recount.