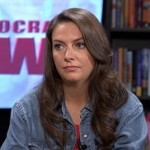 Five senators are now calling on President Trump to resign over allegations that he sexually harassed or assaulted women, and 56 House lawmakers with the Democratic Women’s Working Group are calling for a congressional investigation into the allegations.

Meet the Miss USA Contestant Accusing Trump of Sexual Misconduct as Senators Call for Him to Resign
Five senators are now calling on President Trump to resign over allegations that he sexually harassed or assaulted women, and 56 House lawmakers with the Democratic Women’s Working Group are calling for a congressional investigation into the allegations. This comes as three of the 16 women who have publicly accused Trump of sexual harassment held a press conference Monday in New York, demanding that Congress take action. One of them is Samantha Holvey, a former Miss USA contestant for North Carolina when Trump owned the pageant.

Roy Moore Attacks Doug Jones over Abortion Rights, Deflecting from Child Molestation Accusations
In Alabama, voters are heading to the polls today in a special election for a U.S. Senate seat that pits Democrat Doug Jones against Roy Moore, an anti-abortion candidate who has been accused by at least nine women of sexually harassing or assaulting them when they were teenagers—one as young as 14. We get response from Planned Parenthood President Cecile Richards and Samantha Holvey, a former Miss USA Contestant who is one of 16 women who have accused President Trump of sexual misconduct and grew up in the southern United States.

Cecile Richards: Mike Pence is “Orchestra Master” of Assault on Women’s Rights Under Trump
Planned Parenthood President Cecile Richards says the first year of President Trump’s administration may be the worst year for women of any administration in United States history. But, she notes, it has also been a year of organizing and resistance by women and their allies.

Rep. Gutiérrez on Passing the DREAM Act, Deaths in Puerto Rico & His Aspirations for the Presidency
In one of the biggest immigration rallies of the year, thousands rallied last Wednesday on Capitol Hill to demand Congress pass the DREAM Act before the end of 2017. About 100 people were arrested in an act of civil disobedience, including Illinois Congressmember Luis Gutiérrez, Democrat of Illinois. He is a member of the Judiciary Committee and co-chair of the Immigration Task Force of the Congressional Hispanic Caucus. Last month, he announced he will not seek re-election next year, after 13 terms in the House, in order to focus more on the recovery in Puerto Rico after Hurricane Maria.