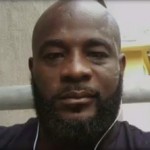 The North Miami police department is facing growing criticism after one of its officers shot an African-American behavioral therapist who was attempting to help an autistic man. At the time, therapist Charles Kinsey was helping to calm his autistic patient Arnaldo Rios Soto. Police responded after receiving a 911 call about a man who was possibly holding a gun. 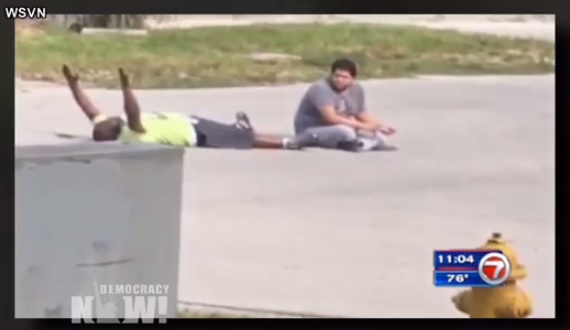 In North Miami, the city’s police department is facing growing criticism after one of its officers shot an African-American behavioral therapist who was attempting to help an autistic man. At the time of the shooting, behavioral therapist Charles Kinsey was helping to calm Arnaldo Rios Soto, a 26-year-old autistic man, who had wandered away from a group home. Police responded after receiving a 911 call about a man who was possibly holding a gun.

Police soon surrounded Rios Soto and the therapist, Charles Kinsey. The video shows Kinsey lying on the ground with his hands in the air. He told police no one was armed. In a cellphone video of the shooting, Kinsey can be heard telling police, “All he has is a toy truck. A toy truck. I am a behavioral therapist at a group home.” Rios Soto’s family says he has been traumatized by the incident and still wears the blood-soaked jacket he had on the day his friend, caregiver and therapist was shot by police. Meanwhile, Kinsey now walks with a cane and cannot stand on his leg for long.

While all eyes have been on the Republican and Democratic platforms decided at the national conventions earlier this month, a broad coalition associated with the Black Lives Matter movement has released a platform of its own, demanding reparations and an “end to the wars against Black people.”

The list of demands from the Movement for Black Lives platform also includes the abolition of the death penalty, legislation to recognize the impacts of slavery, as well as investments in education initiatives, mental health services and employment programs. The publication comes just a week before the second anniversary of the shooting of Michael Brown in Ferguson, Missouri, which sparked months of protests and catalyzed a national conversation about police killings of unarmed African-American men.

On Monday, hundreds of activists gathered at New York City Hall demanding the defunding of the New York Police Department, the firing of New York City Police Commissioner Bill Bratton and reparations for victims of police brutality. Democracy Now!’s Charina Nadura and Andre Lewis were at the park speaking to protesters.

As Donald Trump continues to attack Khizr and Ghazala Khan, the parents of a Muslim U.S. soldier who died in Iraq, we turn to a side of the Khans few have seen. In 2008, the couple were filmed visiting the grave of their son in the HBO documentary “Section 60: Arlington National Cemetery.” An excerpt fro the film is aired.

The U.S. military carried out two airstrikes in Libya against ISIS fighters on Monday in the latest escalation of the U.S. war against the self-proclaimed Islamic State. The strikes took place in the city of Sirte. Pentagon officials said the campaign would continue until ISIS has been driven from the city, which it took over last year.

Libya has been engulfed in fighting after a U.S.-backed military intervention ousted longtime dictator Muammar Gaddafi in 2011. The Pentagon said Libya’s Western-backed unity government requested the airstrikes. The so-called unity government is one of three competing governments that claim legitimacy in the country.