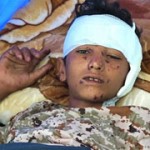 At least 20 people died Sunday when a Saudi-led coalition airstrike hit a wedding party in northern Yemen. Most of the dead were reportedly women and children who were gathered in one of the wedding party tents. The bride was among the dead.

No End in Sight for US-Backed Yemen War as Airstrike Kills At Least 20, Including Bride, at Wedding
At least 20 people died Sunday when a Saudi-led coalition airstrike hit a wedding party in northern Yemen. Most of the dead were reportedly women and children who were gathered in one of the wedding party tents. The bride was among the dead. Medics and residents said more than 46 others—including 30 children—were also injured. The attack on the Yemeni wedding party was one of at least three airstrikes over the weekend that killed Yemeni civilians. A family of five died in an airstrike in the province of Hajjah. And 20 civilians died on Saturday when fighter jets bombed a bus near the city of Taiz. Earlier this month, U.N. Secretary-General António Guterres said Yemen had become the world’s worst humanitarian crisis.

As Cuba Gains a New President, Raúl Castro Steps Back, Not Down, from Power
For the first time since the Cuban revolution toppled dictator Fulgencio Batista, a president who does not have the last name Castro has taken power. Miguel Díaz-Canel was sworn in as president last Thursday. He succeeds Raúl Castro, who served two consecutive 5-year terms in office. Castro is now 86 years old and will remain head of the Communist Party. Fidel Castro handed over power to his brother Raúl in 2008 while his health deteriorated, and died in 2016. Thursday’s session was held on the 57th anniversary of Cuba’s 1961 defeat of a CIA-backed Cuban exile invasion known as the Bay of Pigs. Díaz-Canel began his term with a promise to defend the socialist revolution led by the Castro brothers.

The Untold Story of How Fidel Castro’s Love Affair with ABC Journalist Altered U.S.-Cuban Relations
A new Politico cover story reveals how an ABC journalist named Lisa Howard conducted a secret liaison with Cuba’s Fidel Castro, eventually establishing a secret back channel between Castro’s office and the White House. Peter Kornbluh directs the Cuba Documentation Project at the National Security Archive at George Washington University, and who wrote the piece in Politico, “’My Dearest Fidel': An ABC Journalist’s Secret Liaison with Fidel Castro.”

Activists Demand Release of Manuel Duran, Prominent Latino Journalist in Memphis Jailed by ICE
Immigrants rights activists are demanding the release of Manuel Duran, a prominent Latino journalist in Memphis who has been in ICE custody since early April. Duran was detained by immigration officials after he was arrested while covering a protest against immigrant detention outside a county jail. Duran, who was born in El Salvador, is a well-known reporter on Spanish radio stations in Memphis. He also runs the online site Memphis Noticias. Duran issued a statement while detained about the conditions in the LaSalle Detention Center in Jena, Louisiana, where he is being held. He writes, “Through this experience I have learned first hand details about the treatment our immigrants receive before they are deported. How they keep the lights on day and night and you have to sleep with a towel over your eyes. How they make you lie in bed for 45 minutes, in what seems to be at random after roll calling, and you cannot use the phone or the bathroom during that time.”