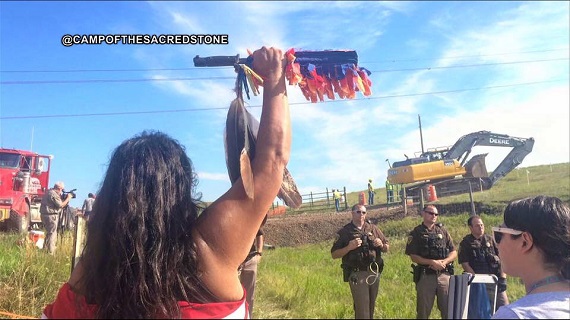 As the Obama administration begins a new push to approve the Trans-Pacific Partnership, known as the TPP, more than 200 of the country’s leading economists and legal scholars have written a letter urging Congress to reject the 12-nation trade pact, citing its controversial investor-state dispute settlement. Critics say the so-called ISDS regime creates a parallel legal system granting multinational corporations undue power. “This is an agreement so repugnant that members of Congress do not want to vote for it,” says Lori Wallach, director of Public Citizen’s Global Trade Watch.

The show continues coverage of the standoff at Standing Rock, where on Saturday the Dakota Access pipeline company unleashed dogs and pepper spray on Native Americans seeking to protect a sacred tribal burial site from destruction. Just a few hours before the attack, Democracy Now! interviewed Standing Rock Sioux tribal historian LaDonna Brave Bull Allard about another attack against her tribe more than 150 years ago. On September 3, 1863, the U.S. Army massacred more than 300 members of the Standing Rock Sioux Tribe in what became known as the Whitestone massacre. LaDonna Brave Bull Allard is also one of the founders of the Sacred Stone camp, launched on her land on April 1 to resist the Dakota Access pipeline.

In Washington, D.C., a federal judge has ruled that construction on sacred tribal burial sites in the path of the $3.8 billion Dakota Access pipeline can continue. Yesterday, U.S. District Judge James Boasberg issued a temporary restraining order that halts construction only between Route 1806 and Lake Oahe, but still allows construction to continue west of this area. The ruling does not protect the land where, on Saturday, hundreds of Native Americans forced Dakota Access to halt construction, despite the company’s security forces attacking the crowd with dogs and pepper spray. This part of the construction site is a sacred tribal burial ground. Stephanie Tsosie, associate attorney with Earthjustice who helps represent the Standing Rock Sioux Tribe in its lawsuit against the Army Corps of Engineers over the Dakota Access pipeline, offers an update.