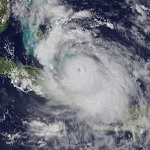 States of emergency have been declared in Florida, Georgia and the Carolinas as Hurricane Matthew barrels toward the Southeast coastline. More than 2 million people have been urged to evacuate their homes, and an estimated 29 people have already died. Many scientists are saying climate change has intensified Hurricane Matthew because warmer ocean waters help create stronger hurricanes.

States of emergency have been declared in Florida, Georgia and the Carolinas as Hurricane Matthew barrels toward the Southeast coastline. More than 2 million people have been urged to evacuate their homes. The record-breaking storm has already killed at least 26 people in Haiti and four in the Dominican Republic. The storm is soon expected to hit the Bahamas and then strengthen as it moves toward Florida. Meteorologists are predicting Matthew could be the strongest hurricane to hit the United States since Wilma in 2005. Many scientists are saying climate change has intensified Hurricane Matthew because warmer ocean waters help create stronger hurricanes. Matthew is already the longest-lived Category 4 or 5 hurricane in the Eastern Caribbean on record.

To talk more about Hurricane Matthew and climate change, Amy Goodman and Nermeen Shaikh spoke to Guardian journalist Oliver Milman, and Michael Mann, a distinguished professor of atmospheric science at Penn State University. His latest book, co-authored with political cartoonist Tom Toles, is titled “The Madhouse Effect: How Climate Change Denial Is Threatening Our Planet, Destroying Our Politics, and Driving Us Crazy.” Mann is also author of “The Hockey Stick and the Climate Wars: Dispatches from the Front Lines.” (He is also part of RealClimate, a website run by climate scientists.)

If you are in one of the affected areas, we’re thinking of you — please be safe.