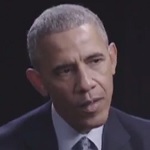 President Obama says the U.S. Army Corps of Engineers is considering rerouting the $3.8 billion Dakota Access pipeline, amid months of resistance from the Standing Rock Sioux Tribe and members of more than 200 other Native American nations and tribes from across the Americas.

President Obama says the U.S. Army Corps of Engineers is considering rerouting the $3.8 billion Dakota Access pipeline, amid months of resistance from the Standing Rock Sioux Tribe and members of more than 200 other Native American nations and tribes from across the Americas. “My view is that there is a way for us to accommodate sacred lands of Native Americans,” Obama said. “And I think that right now the Army Corps is examining whether there are ways to reroute this pipeline in a way.”

Meanwhile, on Wednesday, police deployed pepper spray and tear gas against dozens of Native American water protectors during a standoff at Cantapeta Creek, north of the main resistance camp. At least two people were shot with nonlethal projectiles. Video and photos show police firing the pepper spray and tear gas at the water protectors, who were peacefully standing in the creek. The U.S. Army Corps of Engineers had ordered police to arrest the Native Americans and destroy a bridge that members of the camp had constructed over the creek in order to protect a sacred burial ground they say is being destroyed by construction and law enforcement activity.

Today’s show also looks at the Texas billionaire behind the Dakota Access Pipeline: Kelcy Warren, the CEO of Energy Transfer Partners. Described by Bloomberg as “among America’s new shale tycoons,” Warren is personally worth $4 billion. He has become a major donor to the Republican Party. During this election cycle, he gave over $500,000 to a super PAC backing former Texas Governor Rick Perry. He also maxed out his donations to House Speaker Paul Ryan, House Energy Chair Fred Upton, House Majority Leader Kevin McCarthy and Senate Energy and Natural Resources Chair Lisa Murkowski.

Kelcy Warren also owns a small music label and recording company, and is the founder and driving force behind the Cherokee Creek Music Festival in Texas. Nermeen Shaikh and Amy Goodman spoke to Sue Sturgis. Her recent piece on Facing South is headlined “Meet the Texas Billionaire and GOP Donor Behind the North Dakota Pipeline Controversy.”