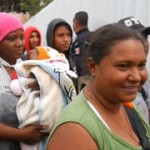 A standoff continues on the U.S.-Mexico border, where scores of asylum seekers are attempting to cross into the United States after taking part in a month-long caravan that began more than 2,000 miles away in the southern Mexican state of Chiapas.

As Caravan of Migrants Begins Entry at U.S.-Mexico Border, Trump Admin Attacks Legal Asylum Process
A standoff continues on the U.S.-Mexico border, where scores of asylum seekers are attempting to cross into the United States after taking part in a month-long caravan that began more than 2,000 miles away in the southern Mexican state of Chiapas. Many of the caravan participants are migrants fleeing violence in Honduras, Guatemala and El Salvador. Around 100 have been accepted for processing, but scores remain camped out by the border near San Diego, California, as officials claim the border entry point has limited capacity. President Trump and Attorney General Jeff Sessions have attacked the migrants in statements and tweets. “It’s very clear that President Trump and Attorney General Sessions do not understand this section of federal law,” says attorney Nicole Ramos, director of the Border Rights Project of Al Otro Lado, who represents members of the caravan. “The caravan members that are camped out at the border are trying to access a legal process which has existed for decades.”

Arundhati Roy’s Latest Novel Takes on Fascism, Rising Hindu Nationalism in India & Abuses in Kashmir
Legendary award-winning author Arundhati Roy won the Booker Prize in 1997 for her novel “The God of Small Things.” In 2017, 20 years after the publication of her first novel, she published another work of fiction, just out in paperback, titled “The Ministry of Utmost Happiness.” The novel was longlisted for the Booker Prize and nominated for the National Book Critics Circle Award. The book has been hailed as “an elegy for a bulldozed world.” Arundhati Roy received the 2002 Lannan Foundation Cultural Freedom Prize, and her journalism and essays have been collected in several books, including “The End of Imagination,” “Field Notes on Democracy: Listening to Grasshoppers” and “Capitalism: A Ghost Story.”