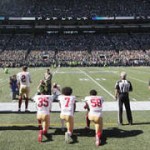 The NFL has announced it will fine teams if players refuse to stand for the national anthem before games. But players will be allowed to stay in the locker room during the anthem. Over the past two seasons, dozens of players have knelt during the anthem to protest police shootings of unarmed black men.

NFL Bans National Anthem Protests On Same Day Video of Police Tasering of NBA Player is Released
The National Football League has announced it will fine teams if players refuse to stand for the national anthem before games. But under the new rules adopted by the league’s 32 owners, players will be allowed to stay in the locker room during the anthem. Over the past two seasons, dozens of players have knelt during the anthem to protest police shootings of unarmed black men. The on-field protests began in August 2016 when quarterback Colin Kaepernick refused to stand for the anthem to protest racism and police brutality. President Trump has praised the NFL’s new rule, saying the league is “doing the right thing.” Just hours after the NFL announcement, the sports world was jolted by the release of a video showing police officers in Milwaukee tasering NBA player Sterling Brown, who plays for the Milwaukee Bucks. Brown, who is African-American, was approached by police after he parked his car across two handicap spaces in front of a Walgreens. The body cam footage confirms Brown was not “combative,” as police initially claimed, in a dispute over the parking violation. In a statement, Brown said, “Situations like mine and worse happen every day in the black community. Being a voice and a face for people who won’t be heard and don’t have the same platform as I have is a responsibility I take seriously.”

Volcano Lava Reaches Geothermal Plant and Pacific Ocean in Hawaii, Risking Public Health Disaster
On the Big Island in Hawaii, the Kilauea volcano is continuing to erupt, spewing plumes of ash and lava. Lava is flowing increasingly close to the Puna Geothermal Venture plant, or PGV, which provides 25 percent of the Big Island’s energy. Workers are rushing to shut down the power plant to prevent the uncontrollable release of toxic gases from the site. The PGV came online in 1989 amid controversy over its location on what some residents say is sacred land. Many native Hawaiians believe the volcano is home to Pele, the goddess of fire. Others say that though geothermal energy is renewable, the plant poses risks to the health of residents and the environment.

“The Tale”: Astonishing New Movie Tackles Filmmaker Jennifer Fox’s Reckoning with Child Sexual Abuse
As the #MeToo movement has inspired women around the world to come forward with their stories of sexual harassment, abuse and assault, we turn to a remarkable new film that is a narrative memoir about a woman’s own reckoning with childhood sexual abuse. It is directed by the woman who experienced the abuse: Jennifer Fox. It premieres May 26 on HBO. “The Tale” premiered earlier this year at the Sundance Film Festival. The film’s stars include Laura Dern, Ellen Burstyn, Jason Ritter and Common. The film received rave reviews, with The Guardian calling it “a stunning sexual abuse drama” and “the mother of all #MeToo movies.”