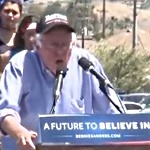 Today, Amy Goodman interviewed University of Illinois professor Robert McChesney on the mainstream media handling of the 2016 election. He describes this as “an all-time low.” Meanwhile, Donald Trump is reportedly considering suing The New York Times after it ran a major report on his past treatment of women. 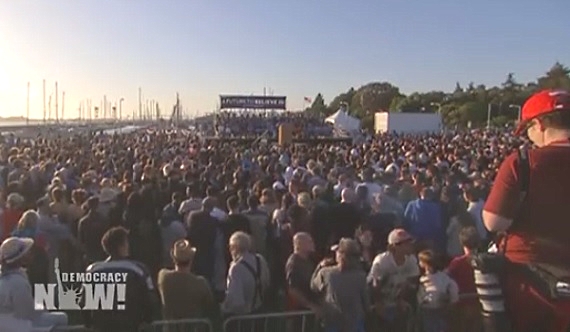 Today, Amy Goodman interviewed Robert McChesney, a professor at the University of Illinois at Urbana-Champaign and co-founder of Free Press, on the mainstream media handling of the 2016 election. He describes this as “an all-time low:”

You know, you have in the Sanders campaign—whatever one might think of Sanders, as a journalist, you’re looking at one of the most extraordinary political stories in decades that’s come along. You have someone who’s galvanized young support on really an entirely different vision of our society like no other candidate, again, in decades. As journalists, you’d think this would be heaven on Earth, this is the greatest story you could possibly ever cover; you’d look to the sky and say, “Thank you for putting me here in 2016.” Yet what we’ve seen is the Sanders campaign has been largely neglected—all the data shows this—barely covered. And the coverage and the framing of it has been largely through the eyes of the establishment for the Hillary Clinton campaign: This guy is a nuisance, he’s a pain in the butt; he’s getting in the way, in front of the real candidate, the presumptive nominee—presumptive going back to the very beginning. And when you see Sanders or one of his surrogates on the air, generally the tenor of the questioning is “What would Hillary’s people want to ask him?” You know, it’s never like “Let’s take these people on their own terms.” So you put it all together, it’s been pretty distressing and the source, I think, of frustration for a lot of people, that they’ve not really had a fair hearing and a fair exposure to people who rely upon cable news networks and the mainstream media to learn about politics.

The other issue that’s really crucial here, and it gets to the Nevada issue, is that it’s also brought to the front just how little actual journalism goes on in American mainstream journalism, how much of it is simply regurgitating what people in power tell them, how much of it is simply predictions that are mindless. You know, there’s all sorts of crucial issues, everywhere you turn, that journalists should be diving into, looking at, like the claims about Nevada. We had all this reporting about purported threats and violence in Nevada, but it was all based on basically taking at face value the words of one side and dismissing the words of the other side. This was videotaped. They could actually go in and interview people, talk to people, and get to the bottom of it before they announce the results.

In other media news, Republican presidential candidate Donald Trump is reportedly considering suing The New York Times after it ran a major report on his past treatment of women, and has vowed to make it easier to sue news organizations, in what McChesney describes as “either my way or the highway.”

On Wednesday, Facebook CEO Mark Zuckerberg met with top conservative media figures, including Glenn Beck, Dana Perino and Tucker Carlson, after his company was accused of suppressing news stories on political grounds. Former Facebook workers told the website Gizmodo they routinely suppressed news stories of interest to conservative readers by keeping them out of the “trending” stories section on the sidebar.

As Pres. Obama nears the end of his eight years in office, he’s facing a unique legacy: the president to deport more people than any other in U.S. history. The Immigration and Customs Enforcement agency is reportedly preparing to launch a month-long campaign of raids specifically aimed at rounding up and deporting undocumented Central American mothers and children. This follows a similar campaign of raids against parents and children in Georgia, Texas and North Carolina earlier this year. While the raids have spread fear across neighborhoods, they’ve also inspired increased community organizing to stop deportations—including in Obama’s very own neighborhood of Hyde Park in Chicago.

Finally, a new book explores the work of John Ross, who covered social movements in Mexico and Latin America for nearly 50 years, and authored 10 nonfiction books and 10 books of poetry before he died in 2011. The book is called “Rebel Reporting: John Ross Speaks to Independent Journalists.” Amy Goodman spoke to its co-editor, Norm Stockwell.