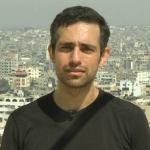 As Palestinians vow to continue protesting against the Israeli occupation of Gaza, a Canadian doctor who was shot by Israeli forces in both legs Monday while he was helping injured Palestinians speaks out. Israeli forces shot dead at least 61 unarmed Palestinian protesters taking part in the Great March of Return Monday.

Meet Tarek Loubani, the Canadian Doctor Shot by Israeli Forces Monday While Treating Gaza’s Wounded
As Palestinians vow to continue protesting against the Israeli occupation of Gaza, a Canadian doctor who was shot by Israeli forces in both legs Monday while he was helping injured Palestinians speaks out. Israeli forces shot dead at least 61 unarmed Palestinian protesters taking part in the Great March of Return Monday, including one doctor. Canada, Britain, Germany, Ireland and Belgium have called for an investigation into the killings. The United Nations Human Rights Council has announced that it will hold a special session Friday to discuss escalating violence in Gaza. We speak with Dr. Tarek Loubani, an emergency room medical doctor, one of 19 medical personnel shot in Gaza on Monday. Loubani is an associate professor at Western University in London, Ontario. He is a Palestinian refugee and a member of the Glia Project creating open-source medical devices for low-resource settings.

50 Years Ago Today: Catonsville 9 Burned Draft Papers with Homemade Napalm to Protest Vietnam War
Fifty years ago today, on May 17, 1968, in the Baltimore suburb of Catonsville, Maryland, a group of Catholic priests and activists stood around a small fire, praying and singing. They had gone into the local draft board office and taken 378 draft records, for the young men in the 1-A category who were most likely to get drafted to go to war in Vietnam. They set fire to the draft records using homemade napalm, made from gasoline and laundry soap, to symbolize the U.S. military’s use of napalm on Vietnamese civilians. Video of the act of civil disobedience was seen around the world. They became known as the Catonsville Nine, and in 1970 they were given prison sentences of up to three years behind bars.

Trump Pursues Denuclearization in North Korea & Nobel Peace Prize, While Ramping Up US Weapons Sales
We continue our look at how North Korea is threatening to cancel the June 12 U.S.-North Korea summit, after President Trump’s national security adviser, John Bolton, said on Sunday the U.S. should use the so-called Libyan model for denuclearization.