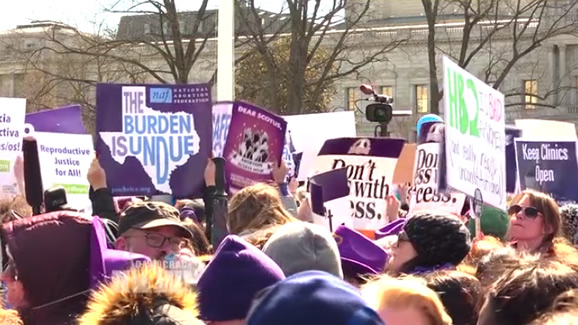 The Supreme Court heard oral arguments Wednesday in the most significant abortion case in a generation. Abortion providers in Texas, led by Whole Woman’s Health, have challenged provisions of a sweeping anti-choice law passed by the Texas state Legislature in 2013 despite a people’s filibuster and an 11-hour stand by Texas state Senator Wendy Davis. The provisions at stake force abortion clinics to meet the standards of hospital-style surgery centers and require providers to obtain admitting privileges at a nearby hospital—a task many can’t achieve, in part due to anti-choice sentiment. Similar restrictions have been passed in multiple states. As the case was being argued inside the court, thousands of people converged on the sidewalk in front of the Supreme Court, including abortion providers, women who have had abortions, and anti-choice activists. Democracy Now! was at the rally.