Pres. Obama has nominated Chief Judge Merrick Garland to the Supreme Court. Senate Majority Leader Mitch McConnell has said the Senate will not even hold a hearing until there is a new President. 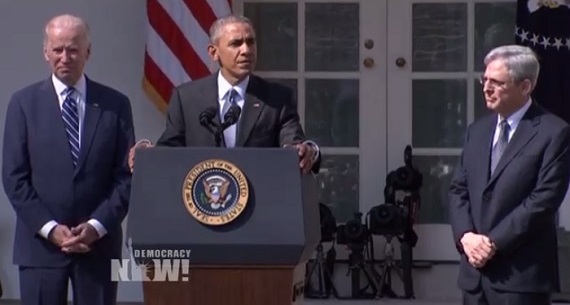 President Obama has nominated Chief Judge Merrick Garland to replace Antonin Scalia on the Supreme Court. As expected, Senate Majority Leader Mitch McConnell has claimed that the nomination is an attempt to “politicize” the process for the election, and stated the Senate will not even hold a hearing until there is a new President.

While it would seem Obama has nominated a centrist in order to prevent the Republicans blocking the nomination effectively, some groups have expressed concern over his judicial record.

Amy Goodman interviewed Terry O’Neill, president of the National Organization for Women, who called Judge Garland a “nowhere man” and questioned how he would rule on crucial women’s rights cases. Ian Millhiser, senior fellow at the Center for American Progress Action Fund and editor of ThinkProgress Justice, called Senator McConnell’s actions “completely unprecedented” and pointed out that a third of all presidents had nominated to the Supreme Court during their last year in office.

“This idea that there’s some sort of rule that you are less—that Barack Obama is less the president because he’s in his last year, that’s something that hasn’t existed before. And Mitch McConnell has said that he will not guarantee the next president’s nominee a vote, depending on who that president is. So what’s really going on here is that the rule that the Senate Republicans want to set is that you don’t get your nominee confirmed if you are a Democrat.”

Today’s show also features a study into the 1927 case Buck v. Bell, when the Supreme Court upheld a statute that enabled the state of Virginia to sterilize so-called mental defectives or imbeciles. The decision resulted in 60,000 to 70,000 sterilizations of Americans considered “unfit” to reproduce. At the Nuremberg trials, lawyers for Nazi scientists cited the opinion in defense of their actions.