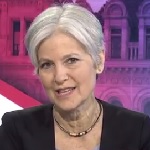 As Bernie Sanders prepares to meet with President Obama, Green Party presidential candidate Jill Stein has also been reaching out to the Vermont senator. With Hillary Clinton claiming victory in the Democratic race, Stein is attempting to start a dialogue with the Sanders campaign. On today’s show Stein takes aim at the presumptive nominees of both major parties. 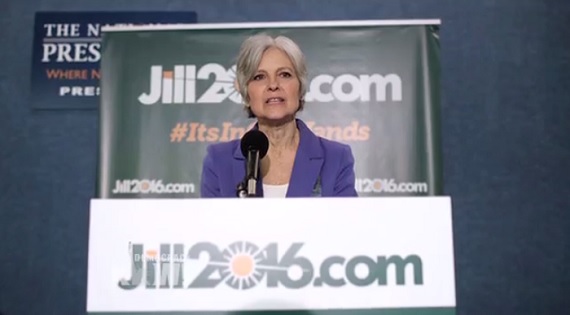 As Bernie Sanders prepares to meet with President Obama, Green Party presidential candidate Jill Stein has also been reaching out to the Vermont senator. With Hillary Clinton claiming victory in the Democratic race, Stein is attempting to start a dialogue with the Sanders campaign.

In an open letter in April, Stein wrote, “In this hour of unprecedented crisis—with human rights, civilization, and life on the planet teetering on the brink—can we explore an historic collaboration to keep building the revolution beyond the reach of corporate party clutches, where the movement can take root and flourish, in the 2016 election and beyond?”

In a discussion with Amy and Juan, Stein takes aim at the presumptive nominees of both major parties, Donald Trump and Hillary. “Trump says very scary things—deporting immigrants, massive militarism and ignoring the climate. Hillary, unfortunately, has a track record for doing all of those things,” Stein says.

“Hillary has supported the deportations of immigrants, opposed the refugees—women and children coming from Honduras, whose refugee crisis she was very much responsible for by giving a thumbs-up to this corporate coup in Honduras that has created the violence from which those refugees are fleeing. We see these draconian things that Donald Trump is talking about, we actually see Hillary Clinton doing.”

Meanwhile, New York Governor Andrew Cuomo has issued the first-ever executive order forcing state agencies to divest from any organizations aligned with the Boycott, Divestment and Sanctions movement. BDS is an international campaign to pressure Israel to comply with international law and respect Palestinian rights. However, its opponents say BDS is a thinly disguised anti-Semitic attempt to debilitate or even destroy Israel. Cuomo’s executive order forces state officials to make a list of businesses and groups who are engaged in activities targeting Israel.

The team interviewed Rebecca Vilkomerson, executive director of Jewish Voice for Peace, and Robert Freedman, a visiting professor of political science at Johns Hopkins University and the former president of Baltimore Hebrew University.

Also, more than 60,000 people have signed a petition calling for Stanford University to apologize publicly to the woman who was raped on campus last year by a Stanford University swimmer. The case made national news this month when a judge ordered the rapist Brock Allen Turner to just six months in jail even though he was caught sexually assaulting an unconscious woman behind a dumpster. A Stanford law professor has launched an effort to recall Judge Aaron Persky, who quietly began a new six-year term this week. Separately, more than 800,000 people have signed a petition to remove the judge.

The victim’s powerful letter to her attacker has been viewed more than 13 million times online. “You took away my worth, my privacy, my energy, my time, my intimacy, my confidence, my own voice, until today,” she wrote in the letter, addressing her rapist directly. “You bought me a ticket to a planet where I lived by myself.” Stanford is also facing criticism for its handling of sexual abuse on campus. A new report by The Daily Beast found that the university reported 26 rapes on campus in 2012, 2013 and 2014. That’s one sexual assault every two weeks for three years.