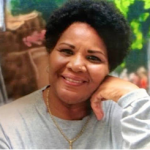 President Trump has commuted the life sentence of a woman who was imprisoned for a first-time nonviolent drug offense, after her cause was taken up by reality television star Kim Kardashian West.

Trump Frees Alice Johnson; What About Thousands Still Serving Life for Nonviolent Drug Offenses?
President Trump has commuted the life sentence of a woman who was imprisoned for a first-time nonviolent drug offense, after her cause was taken up by reality television star Kim Kardashian West. Alice Marie Johnson, a 63-year-old grandmother from Memphis, was released Wednesday from federal prison in Aliceville, Alabama, where she had been serving her sentence for nearly 22 years. While Alice Marie Johnson has been released, thousands of other prisoners are still serving life without parole for nonviolent drug offenses. Jennifer Turner was part of the legal team representing Johnson in her application for clemency. She is a human rights researcher with the American Civil Liberties Union and author of the ACLU report titled “A Living Death: Life Without Parole for Nonviolent Offenses.”

Students Push to Oust Nicaraguan President Ortega as Death Toll Rises Amid Bloody Police Crackdown
At least five people were killed over the weekend in Nicaragua amid escalating anti-government protests that have engulfed the country since mid-April. More than 110 people have been killed since widespread demonstrations to oust Nicaraguan President Daniel Ortega began in mid-April, when his government announced plans to overhaul and slash social security. The protests, and the government’s bloody repression, mark the biggest crisis since Ortega was elected 11 years ago.

The Country Is Crying: Nicaraguan Mother Demands Justice After Police Kill Her Son at Protest
More than 110 people have been killed, and thousands have been injured, in widespread anti-government demonstrations in Nicaragua. Activists are demanding that President Daniel Ortega be removed from office immediately amid the bloody police crackdown. Alba García is demanding justice after her 22 year-old son Moroni López was shot and killed by police at a demonstration in Managua in April.

Mexican Court Orders Truth Commission to Oversee New Investigation of 43 Disappeared Students
A Mexican federal court has effectively thrown out the government’s investigation into the disappearance of 43 college students from the Ayotzinapa teachers’ school in 2014 and ordered a new investigation. A three-judge panel issued the ruling Monday after several people suspected in the disappearances asked the judges to review their cases. They said their confessions were extracted by torture. The judicial tribunal responded by issuing a unanimous and wide-ranging indictment of the entire case, saying it “wasn’t quick, effective, independent or impartial.” The judges also accused Mexico’s Attorney General’s Office of failing to follow up on key evidence, writing, “There is no sign that they even explored the lines of investigation that signaled participation of personnel from the Mexican army or the Federal Police.” Amnesty International welcomed the ruling as an important advance in the search for truth and justice.