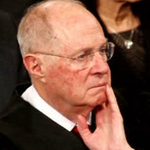 In a move that could transform the Supreme Court for decades, Justice Anthony Kennedy has announced his retirement, giving Trump a chance to pick a second conservative. Kennedy, who was nominated by President Reagan, was widely seen as the swing vote.

Justice Kennedy’s Resignation Opens Door for Far-Right Supreme Court & Overturning of Roe v. Wade
In a move that could transform the Supreme Court for decades, Justice Anthony Kennedy has announced his retirement, giving President Trump a chance to pick a second conservative on the high court. Kennedy, who was nominated by President Reagan, was widely seen as the swing vote on the nine-justice court. On Wednesday, he sided with the conservative wing of the court to deal a major blow to public-sector unions in the case of Janus v. AFSCME. He also sided this week with the majority upholding President Trump’s Muslim travel ban. But Kennedy has sided with the liberal wing of the court on a number of pivotal issues. He has been instrumental in preventing Roe v. Wade from being overturned, and he has supported same-sex marriage, affirmative action and criminal justice reform. On Wednesday, President Trump said he wants to pick a justice who will be on the court for the next 40 or 45 years.

In Janus Case, Court Issues Major Anti-Labor Ruling, Eviscerating Power of Public-Sector Unions
Justice Anthony Kennedy’s announcement came as the Supreme Court struck a major blow to organized labor Wednesday. In a 5-4 ruling written by Justice Samuel Alito, the court sided with Mark Janus, a child support specialist who argued that a state law in Illinois allowing unions to charge a fee for collective bargaining violated his First Amendment rights. The ruling nullifies so-called fair-share provisions and will leave public-sector unions deprived of millions of dollars in union dues. Mark Janus was supported by a host of right-wing groups including the Koch brothers’ Americans for Prosperity and ALEC—the American Legislative Exchange Council.

Jennifer Harbury: Today’s Refugee Crisis Is Blowback from U.S. Dirty Wars in Central America
Human rights lawyer Jennifer Harbury has lived in the Rio Grande Valley in Texas for over 40 years and has been active in the response to the Trump administration’s “zero tolerance” policy. Her husband, Efraín Bámaca Velásquez, was a Mayan comandante and guerrilla who was disappeared after he was captured by the Guatemalan army in the 1980s. After a long campaign, she found there was U.S. involvement in the cover-up of her husband’s murder and torture. Now she continues to work with people fleeing violence in Guatemala, El Salvador and Honduras.

Jennifer Harbury on the Crackdown on Asylum Seekers & How U.S.-Backed Dirty Wars Fueled Drug Cartels
Extended conversation with Jennifer Harbury, a human rights lawyer, who is also the author of “Truth, Torture, and the American Way: The History and Consequences of U.S. Involvement in Torture.”