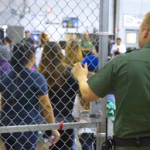 President Trump has signed an executive order claiming to end the separation of children from their parents at the border, but critics warn the order could lead to the indefinite detention of entire families.

Trump Admin to Indefinitely Detain Migrant Families Together; No Plan to Reunite Separated Children
President Trump has signed an executive order claiming to end the separation of children from their parents at the border, but critics warn the order could lead to the indefinite detention of entire families. The government has no plans to reunite the thousands of children already separated from their families with their parents. Franco Ordoñez is the White House correspondent for the McClatchy Washington Bureau. His latest story is headlined, “Trump’s immigration order replaces one crisis with another.”

GEO Group & Private Prisons Stand to Profit as Trump Pushes Indefinite Family Detention
President Donald Trump’s executive order ending family separations at the border opts to indefinitely detain families together instead. The Nation reports that this policy will directly benefit the two largest prison companies in the United States: GEO Group and CoreCivic, formerly Corrections Corporation of America. Bob Libal is the executive director of the Austin-based civil and human rights group Grassroots Leadership. They sued the state of Texas when it tried to classify ICE’s family detention centers as “child care” facilities. They won, but the detention centers continue to operate without a license. His new article in the Texas Observer is headlined, “It’s Time to Decriminalize Immigration.” It is co-authored with Judy Greene.

Report from McAllen, Texas: No One Knows What Will Happen Now to Separated Migrant Children
The government has no plans to reunite thousands of children who have been separated from their parents at the border, despite President Trump’s executive order claiming to end family separations. Zenén Jaimes is advocacy director for the Texas Civil Rights Project. He is part of their team that goes to the federal courthouse in McAllen each day since Trump began his “zero tolerance” policy, and collects information from parents who had their children taken away from them before they were taken to court to face criminal charges for crossing the border.

Lawsuit Claims Detained Migrant Children Have Been Forcibly Injected With Powerful Psychiatric Drugs
Shocking reports have revealed that immigrant children were subdued and incapacitated with powerful psychiatric drugs at a detention center in South Texas. Legal filings show that children held at Shiloh Treatment Center in southern Houston have been “forcibly injected with medications that make them dizzy, listless, obese and even incapacitated,” according to reports by Reveal. Meanwhile, according to another Reveal investigation, taxpayers have paid more than $1.5 billion over the past four years to companies operating immigration youth facilities despite facing accusations of rampant sexual and physical abuse. The reporter who broke these stories is Aura Bogado. She is an immigration reporter with Reveal from the Center for Investigative Reporting. Her latest stories are, “Immigrant children forcibly injected with drugs, lawsuit claims” and “Migrant children sent to shelters with histories of abuse allegations.”

Yemenis Accuse UAE Officers of Sexual Torture Inside Secret Prisons
A new investigation has uncovered rampant sexual violence against Yemeni prisoners held in prisons run by the United Arab Emirates in Yemen. The Associated Press reports that in March, 15 officers lined up the prisoners in the southern city of Aden and ordered them to undress before searching their anal cavities, claiming they were looking for contraband cell phones. The prisoners screamed and cried and those who resisted were beaten and threatened by dogs. Hundreds of prisoners reportedly suffered similar abuse. A Pentagon spokesman quoted in the piece said the allegations were not substantiated. The UAE is a key ally of the United States and has partnered with Saudi Arabia in its military assault on Yemen.