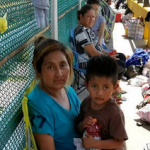 Outrage is growing over the Trump administration’s policy of separating immigrant families who cross the U.S.-Mexico border, many fleeing dangerous conditions and seeking asylum. At least 600 immigrant children were removed from their parents last month.

Trauma at the Texas-Mexico Border: Families Separated, Children Detained & Residents Fighting Back
Outrage is growing over the Trump administration’s policy of separating immigrant families who cross the U.S.-Mexico border, many fleeing dangerous conditions and seeking asylum. At least 600 immigrant children were removed from their parents last month, after Attorney General Jeff Sessions announced the new rule. On Wednesday, 10 members of Congress protested by blocking the entrance to the headquarters of U.S. Customs and Border Protection, the agency tasked with carrying out the forced removal of children from their parents. More protests in at least 60 cities are planned today by the group Families Belong Together, which formed in response to the new policy. The epicenter of this “zero tolerance” crackdown is the Rio Grande Valley in South Texas, where more than half of all migrant families and children have been apprehended by Border Patrol agents since mid-May. Democracy Now! correspondent Renée Feltz spoke with residents taking action in response to the widely condemned practice of separating families.

Residents on Both Sides of the Border Try to Help Asylum Seekers Illegally Turned Away by U.S. Gov’t
Under President Trump’s new “zero tolerance” policy, Attorney General Jeff Sessions has called for people seeking asylum to follow the law and go to official ports of entry to request help. But asylum seekers at international bridges across the Rio Grande Valley in South Texas have been blocked by Border Patrol agents who say they are unable to process them. In some cases, asylum seekers—including women and young children—have been told to wait for days and even weeks on international bridges over the border, often in extreme heat. Residents on both sides of the border have responded by bringing food, water and clothing to people as they wait to be processed. Democracy Now! producer Renée Feltz followed some of them as they delivered aid, and interviewed Jennifer Harbury, a human rights lawyer who has lived in the Rio Grande Valley for over 40 years, about the significance of the United States rejecting legal requests by asylum seekers, detaining them at length, and in some cases deporting them after separating them from their children.

As Detention Centers Hit Capacity, Trump Eyes Tent Cities on Military Bases to Jail Migrant Children
The Trump administration is reportedly planning to build tent cities on military bases near the U.S.-Mexico border to accommodate the increasing numbers of migrant children being held in detention centers. According to McClatchy, Department of Health and Human Services officials are due to visit Fort Bliss, an Army base near El Paso, Texas, in the coming weeks to look at the land where they’re considering building a tent city. HHS detention shelters are 95 percent full and hold more than 10,000 children. The number of migrant children in custody has recently surged by over 20 percent, and a tent city could temporarily accommodate an additional 1,000 to 5,000. In Washington, D.C., we speak with the reporter who broke the story, Franco Ordoñez. He is the White House correspondent for the McClatchy Washington Bureau.