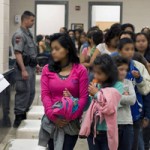 A federal judge has ruled that the Trump administration may not arbitrarily detain people seeking asylum. U.S. District Judge James Boasberg ruled asylum seekers who have passed a credible fear interview should be given humanitarian parole, not indefinite detention.

Asylum Seekers Win in Court as Federal Judge Rules Against Indefinite & Arbitrary Detention
A federal judge has ruled that the Trump administration may not arbitrarily detain people seeking asylum. U.S. District Judge James Boasberg ruled asylum seekers who have passed a credible fear interview should be given humanitarian parole, not indefinite detention. The suit was brought by the American Civil Liberties Union, Human Rights First and the Center for Gender and Refugee Studies. Eunice Lee is co-legal director at the Center for Gender and Refugee Studies.

From Separating Families to Jailing Asylum Seekers, Trump Admin Accused of Criminalizing Migration
The Department of Health and Human Services still has not disclosed how many migrant children they are holding who have been separated from their parents at the border. Last week, HHS Secretary Alex Azar said 2,047 separated minors were still in the care of the Office of Refugee Resettlement. But the department has refused to give updated numbers, even though the Trump administration is facing a July 10 court-imposed deadline to reunite all separated children under the age of 5 with their parents. Meanwhile, CNN is reporting the Department of Homeland Security has been taking DNA samples of immigrant children. Immigration officials have reportedly been swabbing DNA from the cheeks of children as young as 2 months old, without consent, ostensibly in a bid to later reunite children with their parents. Rights groups have condemned the move, saying it could allow the federal government to track young immigrants for the rest of their lives.

As Gov’t Says 3,000 Migrant Children Are in Custody, Detained Mothers Are Organizing to Find Their Kids
While the government struggles to reunite families who have been separated at the border under President Trump’s “zero tolerance” policy, one detained Honduran woman has been organizing mothers behind bars to help find their children. The New Yorker reports that Mabel Gonzales has carefully documented the cases of mothers who have been separated from their children at a detention facility in El Paso, Texas, where she is currently jailed. Gonzales herself was separated from her two teenage sons eight months before the Trump administration announced its “zero tolerance” policy. She records the details of other separated mothers despite not being allowed to have a notebook while detained. She then shares the information with the Las Americas Immigrant Advocacy Center in El Paso to help separated mothers locate their children.

Concentration Camps in the U.S.: Andrea Pitzer Decries Tent Cities for Detaining Kids Without Trial
Has the Trump administration set up concentration camps in Texas for migrants? The answer is yes, according to at least one expert: Andrea Pitzer, the author of “One Long Night: A Global History of Concentration Camps.” In one of her latest articles, Pitzer writes, “While writing a book on camp history, I defined concentration camps as the mass detention of civilians without trial, usually on the basis of race, religion, national origin, citizenship, or political party, rather than anything a given individual has done. By this definition, the new child camp established in Tornillo, Texas, is a concentration camp.”