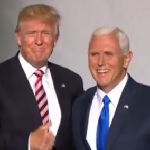 As Indiana Governor Mike Pence is added to the Republican ticket as Donald Trump’s running mate, we look at his religious right-wing track record as governor of Indiana and, before then, as an Indiana congressman. “The enemy, to them, is secularism,” says guest Jeff Sharlet of Pence’s faith-based supporters. “They want a God-led government.” 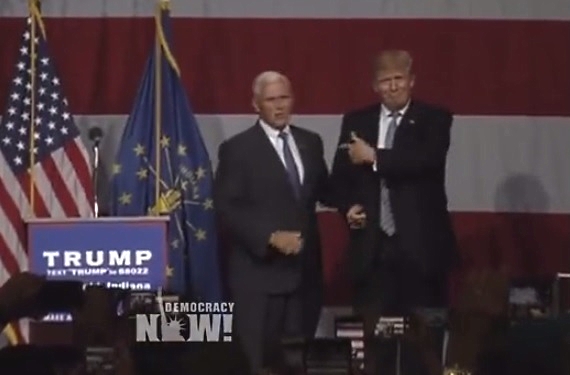 As Indiana Governor Mike Pence is added to the Republican ticket as Donald Trump’s running mate, we look at his religious right-wing track record as governor of Indiana and, before then, as an Indiana congressman. “The enemy, to them, is secularism,” says guest Jeff Sharlet of Pence’s faith-based supporters. “They want a God-led government.” Sharlet is the author several books, including “C Street: The Fundamentalist Threat to American Democracy.”

Before he teamed up with Donald Trump, Republican vice-presidential nominee Mike Pence had a history as a conservative talk radio host in which he often slammed officials caught in cheating scandals. We play an excerpt from his show and speak with Politico reporter Darren Samuelsohn, who reported on the show in his recent article, “The Old Cassettes That Explain Mike Pence.”

On Wednesday, Senator Ted Cruz dominated the headlines when he refused to endorse Donald Trump during his prime-time speech at the Republican National Convention. Cruz is not the only prominent Republican to have withheld support for Trump. Many of the party’s most prominent members didn’t even show up. Democracy Now! headed to the convention floor to find out who made it to the convention and who didn’t.

Protests continued outside the RNC on Wednesday as hundreds of people gathered to erect a “Wall Against Trump,” blocking the entrance to the arena with a massive cloth banner painted like a wall. The Republican Party has formally endorsed Donald Trump’s proposal to build a wall along the U.S.-Mexico border in the party platform.

As Indiana Governor Mike Pence accepts the Republican nomination for vice president, the show looks at how the religious right will respond to the man who was their “dream candidate” in 2012. “In one fell swoop, he strengthens his connections to religious right leaders and to the Koch brothers’ network,” says guest Peter Montgomery, senior fellow at People for the American Way.

As the new Republican platform has been described as “the most anti-LGBT platform in the party’s 162-year history,” we get reaction from Charles Moran, board member with the Log Cabin Republicans, which represents LGBT conservatives and allies. He is a delegate to the Republican National Convention from California. Also appearing is Alana Jochum, executive director of Equality Ohio, about how the platform opposes same-sex marriage, appears to endorse so-called conversion therapy and criticizes the Department of Education’s recommendation that schools allow transgender students to use the bathrooms that match their gender identity.

The Washington Post is reporting there are likely fewer black delegates at this year’s Republican convention than at any point in at least a century. According to the Republican Party’s own data, only 18 of the nearly 2,500 delegates are African-American. That’s less than 1 percent. As recently as 2004, 7 percent of Republican delegates were black. On Wednesday night, Democracy Now!’s Carla Wills tracked down some of the 18 African-American delegates.

The Republican National Convention is underway just a few miles from the park where 12-year-old Tamir Rice was shot dead by police in November of 2014 while he was playing with a toy pellet gun. Rev. Dr. Jawanza Karriem Colvin, the pastor of the Olivet Institutional Baptist Church, which is one of the largest African-American congregations in Cleveland, discussed how city officials and activists responded to the killing. He was recently profiled in a Politico report titled “The Preacher Who Took on the Police.”