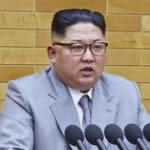 President Trump tweets that his “nuclear button” is “much bigger & more powerful” than North Korean leader Kim Jong-un’s. Meanwhile, North and South Korea have opened lines of communication, saying they are open to direct negotiations.

North and South Korean Leaders Agree to Direct Negotiations as Trump Provokes Kim Jong-un on Twitter
President Trump tweets that his “nuclear button” is “much bigger & more powerful” than North Korean leader Kim Jong-un’s. Meanwhile, North and South Korea have opened lines of communication, saying they are open to direct negotiations. Bruce Cumings, professor of history at the University of Chicago, is author of “North Korea: Another Country.”

Norway Halts Weapons Sales in Yemen War, Citing Humanitarian Crisis, as US & Britain Continue Supply
Norway’s Ministry of Foreign Affairs said Wednesday the country will stop supplying weapons and ammunition to the United Arab Emirates, citing “great concern” over the humanitarian crisis in Yemen. The UAE is part of the Saudi-led coalition that has been carrying out airstrikes in Yemen for nearly three years. Meanwhile, the U.S. and Britain continue to supply the Saudis with billions of dollars’ worth of weapons. The U.S. also provides logistical military support to Saudi Arabia. The Saudi air campaign has killed more than 10,000 civilians in Yemen and displaced more than 3 million. More than 80 percent of Yemenis now lack food, fuel, water and access to healthcare. Journalist Iona Craig was based in Sana’a from 2010 to 2015 as the Yemen correspondent for The Times of London. She was awarded the 2016 Orwell Prize for her reporting on Yemen.

Fordham Students Sue over Free Speech Rights to Establish Students for Justice in Palestine Group
In a case that highlights what some are calling the “Palestine exception” to free speech on college campuses across the nation, we look at students who are suing Fordham University’s Lincoln Center campus in New York for their right to start a Students for Justice in Palestine group. The student government approved the group unanimously, but the dean of students overruled the approval, saying the group would “stir up controversy” and be “polarizing.” On Wednesday, the students asked a judge to reinstate the student government’s approval. Ahmad Awad graduated from Fordham University and is the lead petitioner, now a law student at Rutgers University. Dima Khalidi is director of Palestine Legal.