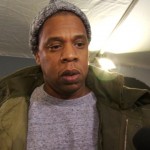 Today marks the first anniversary of President Obama ending juvenile solitary in the federal prison system. Obama took the action in response to the case of New York City teenager Kalief Browder, who committed suicide in 2015 at the age of 22.

Today marks the first anniversary of President Obama ending juvenile solitary in the federal prison system. Obama took the action in response to the case of New York City teenager Kalief Browder, who committed suicide in 2015 at the age of 22. In 2010, when Kalief was just 16, he was sent to Rikers Island, without trial, on suspicion of stealing a backpack. He always maintained his innocence and demanded a trial. Instead, he spent the next nearly three years at Rikers—nearly 800 days of that time in solitary confinement. Here in Park City, Utah, at the Sundance Film Festival, Democracy Now! got an exclusive interview with Jay Z as he premieres his new docuseries, “Time: The Kalief Browder Story.”

Trump’s Executive Actions Reverse Obama Policies on Torture, Healthcare & Guantánamo Bay
Today President Trump is flying to Philadelphia, where congressional Republicans are on retreat. He’s going in an effort to win more support for his political agenda. Over the past five days, he has signed a number of executive orders and presidential memorandums, on issues ranging from Obamacare to the Dakota Access pipeline to the U.S.-Mexico border wall, but many of his actions will require congressional support.

Faiza Patel: Trump Is Taking U.S. Back to Era of George W. Bush—But Worse
According to leaked documents, another executive order is in the works that would temporarily ban most refugees from entering the country and reportedly block visas from being issued to anyone from Syria, Iraq, Iran, Libya, Somalia, Sudan and Yemen.

NYC: Thousands Protest Trump Plan to Impose Ban on Refugees, Block Visas from 7 Muslim Nations
On Wednesday night, thousands of protesters packed into Washington Square Park in New York for an emergency rally in support of Muslim and immigrant rights. The New York chapter of the Council on American-Islamic Relations organized the event after leaked documents showed Trump is preparing to sign an executive order blocking visas from being issued to anyone from Syria, Iraq, Iran, Libya, Somalia, Sudan and Yemen.

In First TV Interview, President Trump Says Torture “Absolutely” Works
During his first televised interview as president, Donald Trump openly embraced torture and waterboarding. “I have spoken, as recently as 24 hours ago, with people at the highest level of intelligence, and I asked them the question: Does it work? Does torture work? And the answer was ‘Yes, absolutely,'” Trump said.

A Day We Were All Afraid Of
Wednesday marked the biggest single day of changes to U.S. immigration policy in recent memory. In a press conference at the Department of Homeland Security, President Trump announced and signed two executive orders to begin construction on a border wall between the U.S. and Mexico and to crack down on those who cross it. Trump’s directive also greatly increases the number of immigration enforcement personnel. The order also strips funding from so-called sanctuary cities. But mayors across the country, including those in New York, Boston, Chicago and Los Angeles, say they will continue to allow police officers to refuse to arrest and detain undocumented immigrants on behalf of federal authorities.

Read leaked drafts of 4 White House executive orders on Muslim ban, end to DREAMer program, and more | Vox
Matthew Yglesias and Dara Lind examine four documents that are supposedly draft orders relating to Trump’s promised “Muslim ban.” Seems immigration to the US is about to become even more difficult.

Government Scientists at U.S. Climate Conference Terrified to Speak with the Press | The Intercept
Sharon Lerner explains the impact of the Trump administration’s recent efforts to silence scientists. “The directives have left scientists fearing reprisal for merely mentioning the global phenomenon that has been at the center of their professional lives for years.”

What’s so strange about Trump’s White House portrait? Experts explain. | Vox
Like everything else about him, it’s kind of troubling and slightly sinister.

Autocracy: Rules for Survival | Masha Gessen
Thanks to Andrew McLuhan for sharing this. Masha Gessen wrote this article in November just after the election, and it’s very well worth a read.