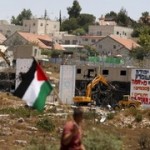 During Wednesday’s press conference, President Obama warned that the expansion of Israeli settlements was making a two-state solution impossible. “I don’t see how this issue gets resolved in a way that maintains Israel as both Jewish and a democracy,” Obama said.

During Wednesday’s press conference, President Obama warned that the expansion of Israeli settlements was making a two-state solution impossible. “I don’t see how this issue gets resolved in a way that maintains Israel as both Jewish and a democracy,” Obama said, “because if you do not have two states, then, in some form or fashion, you are extending an occupation. Functionally, you end up having one state in which millions of people are disenfranchised and operate as second-class occupant—or residents. You can’t even call them ‘citizens’ necessarily.” Rashid Khalidi, Edward Said professor of Arab studies at Columbia University, responds. He’s the author of several books; his most recent is titled “Brokers of Deceit: How the U.S. Has Undermined Peace in the Middle East.”

On Final Day of Obama Presidency, a Look at His Mixed Legacy & the Rise of Neo-Fascism in Washington
Today marks President Obama’s last full day in office. On Friday at noon, Supreme Court Chief Justice John Roberts will swear in Donald Trump as the country’s 45th president. On Wednesday, in his last press conference as president, Obama defended his decision to commute the sentence of Army whistleblower Chelsea Manning, and condemned the Israeli occupation. He also warned Trump that he will not stay silent if he sees what he called the nation’s core values at risk. Eddie Glaude, chair of the Department of African American Studies at Princeton University, looks back at Obama’s legacy and what lies ahead with the new administration. He is author of several books, most recently “Democracy in Black: How Race Still Enslaves the American Soul.”

Climate Denier Scott Pruitt Faces Protests at Senate Hearing as 2016 Is Declared Hottest Year Ever
On Wednesday, scientists with both NASA and NOAA—the National Oceanic and Atmospheric Administration—confirmed 2016 was the hottest year on record, topping the previous record set in 2015, which topped the previous record only one year earlier. The unprecedented warming of the planet due to human-caused climate change comes as Oklahoma Attorney General Scott Pruitt testified in front of the Senate Wednesday during his confirmation hearing to be the head of the Environmental Protection Agency. Pruitt has long denied the overwhelming scientific consensus on climate change. Dozens of people protested outside his hearing. At least three people were arrested. Wenonah Hauter, executive director of Food & Water Watch, offers comments.

Dr. Sidney Wolfe on HHS Nominee Tom Price’s “Cruel” Plans to Repeal the Affordable Care Act
Donald Trump’s pick for the Department of Health and Human Services, Georgia Congressmember Tom Price, appeared Wednesday before the Senate Committee on Health, Education, Labor and Pensions for his confirmation hearing. Price is the chair of the House Budget Committee, a member of the Tea Party Caucus and one of the leading opponents of President Obama’s Affordable Care Act. He opposes abortion and has voted to cut all federal funding for Planned Parenthood. He also supports privatizing Medicare. Congressmember Price’s hearing came only days after CNN reported Price invested thousands of dollars in the medical device maker Zimmer Biomet and then introduced a bill to benefit the company. Guest is Dr. Sidney Wolfe, director of Public Citizen’s Health Research Group.

Web Exclusive: Leonard Peltier Denied Clemency by Obama
The Office of the Pardon Attorney has announced President Obama has denied clemency to imprisoned Native American activist Leonard Peltier. Peltier is a former member of the American Indian Movement who was convicted of killing two FBI agents during a shootout on South Dakota’s Pine Ridge Indian Reservation in 1975. He has long maintained his innocence. Amnesty International condemned the decision.

Four Takeaways from Trump’s Latest Tweet Tantrum | Robert Reich
Donald Trump attacked NBC on Twitter yesterday, after they’d questioned his claim that several companies were bringing jobs back to the U.S. because of him. Robert Reich gives the specifics on why this is another headdesk moment in the career of the President-select.

Shut Down the Inaugural Ball and Parade: A Call to Action From Legba Carrefour | Truthout
Sarah Jaffe interviews Legba Carrefour on the Disrupt J20 movement, which is planning some nonviolent direct action to cause some “good trouble” for the inauguration.

‘He Has This Deep Fear That He Is Not a Legitimate President’ | Politico
Thanks to Lizanne Webb for the tip-off. For this must-read article, Michael Kruse interviewed experts on Donald Trump — namely his biographers.

How to Raise Hell for Members of Congress | Mic Media
Congressman Steve Israel reveals the surprisingly simple way you can give your congressperson hell. (Calling is good, but talking to them in person is better.)