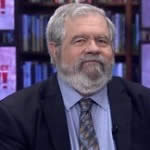 The New York Times reports that the Pentagon is proposing widening the permissible use of nuclear weapons to include responding to cyberattacks and other non-nuclear attacks. The Pentagon has already outlined this strategy in a draft document sent to Trump for approval.

David Cay Johnston: Trump is Determined to Provoke War to Draw Focus from Racist & Erratic Behavior
The New York Times reports that the Pentagon is proposing widening the permissible use of nuclear weapons to include responding to cyberattacks and other non-nuclear attacks to U.S. infrastructure. The Pentagon has already outlined this expanded nuclear strategy in a draft document sent to President Trump for approval. It comes amid a series of moves by the Pentagon and President Trump that have escalated the threat of nuclear war. The Wall Street Journal reports the Pentagon is planning to develop two new sea-based nuclear weapons. The New York Times also reports the Pentagon is conducting a series of war games to prepare for a potential war with North Korea. Pulitzer Prize-winning investigative reporter David Cay Johnston has been covering Donald Trump for nearly 30 years. His latest book is just out, titled “It’s Even Worse Than You Think: What the Trump Administration Is Doing to America.”

“It’s Even Worse Than You Think”: David Cay Johnston on Trump’s First Year in Office
Uninformed. That was the word White House Chief of Staff John Kelly used to describe his boss, President Trump, on Thursday. According to The Washington Post, Kelly told members of the Congressional Hispanic Caucus that some of Trump’s hardline immigration policies—including his call to build a wall along the entire southern border— were “uninformed.” Kelly said, “Certain things are said during the campaign that are uninformed.”

Trump Biographer: Trump is the “Most Racist” President in At Least 100 Years
On Capitol Hill, Democrats are preparing a bill that would formally censure Donald Trump over racist comments in which the president reportedly called African nations, El Salvador and Haiti “shithole countries.” The effort is being led by New York Congressmember Jerrold Nadler and Representative Cedric Richmond, chair of the Congressional Black Caucus. It comes as several Democratic lawmakers have announced they will skip the State of the Union address on January 30 over Trump’s racist remarks. Among them are Earl Blumenauer of Oregon, Frederica Wilson of Florida, Pramila Jayapal of Washington, Maxine Waters of California and John Lewis of Georgia. We speak to David Cay Johnston, author of “It’s Even Worse Than You Think: What the Trump Administration Is Doing to America.”

How Trump’s Deregulatory Push Is Harming Workers, Muzzling EPA Scientists and Unleashing Pollution
As President Trump’s own chief of staff, John Kelly, calls his boss “uninformed,” Trump is transforming the nation by slashing taxes on the rich, gutting the nation’s regulatory system and muzzling climate scientists.

Trump Biographer on the President’s Cognitive Decline & Whether He Will Be Impeached
White House doctor Ronny Jackson said Tuesday President Trump is in good health and displayed a normal score on a cognitive exam, amid mounting questions about President Trump’s mental health. But on Wednesday, medical experts said that the results from Trump’s recent physical exam show the president has high levels of cholesterol and is at serious risk of a heart attack.

Eric has got underway with The Art of Becoming, the 2018 Planet Waves Annual. You can still pre-order all 12 chapter-length signs here for just $99, or you may choose your individual signs here. We will be increasing the price for all 12 signs to $111 today — so grab your copy now to lock in the current price.