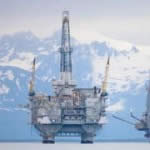 Trump Expands Offshore Drilling in “Assault” on Biodiversity and Coastal & Indigenous Communities
Bipartisan opposition is growing to President Trump’s proposal to greatly expand offshore oil and gas drilling. The reversal of the Obama-era restrictions would open more than a billion acres of water in the Arctic, Pacific, Atlantic and Gulf of Mexico to offshore oil and gas drilling. Initially the Interior Department moved to allow offshore oil and gas drilling in nearly all of the United States’ coastal waters, but then announced it has dropped plans to open up the waters off the coast of Florida, following fierce opposition by Florida’s Republican Governor Rick Scott. Scott is an ally of President Trump, and the state is also home to Trump’s winter resort at Mar-a-Lago. Now governors and lawmakers from Georgia, South Carolina, North Carolina, Virginia, Maryland, Delaware, New York, New Jersey, California, Oregon, Washington and other states are asking why only Florida is being exempted. Subhankar Banerjee is professor of art and ecology at the University of New Mexico. Banerjee is the author of “Arctic National Wildlife Refuge: Seasons of Life and Land” and editor of “Arctic Voices: Resistance at the Tipping Point.”

As Erica Garner Is Mourned, Why Are Black Mothers in NYC Dying at 12 Times Rate of White Mothers?
In Harlem, hundreds of people attended the funeral Monday of anti-police brutality activist Erica Garner, who died at the age of 27 on December 30 after an asthma-induced heart attack, four months after giving birth to her second child. Erica’s father, Eric Garner, was killed when police officers in Staten Island wrestled him to the ground, pinned him down and applied a fatal chokehold in 2014. Her funeral came as a new ProPublica investigation suggests Erica Garner’s postpartum death might be part of a wider national problem in which hospitals are failing African-American mothers, leading to disproportionately high maternal mortality rates. Every year in the United States, between 700 and 900 women die from causes related to pregnancy and childbirth. For every woman who dies, dozens more experience severe and sometimes life-threatening complications annually. Annie Waldman is a reporter at ProPublica. Her most recent article is titled “How Hospitals Are Failing Black Mothers.” The piece is part of a larger year-long ProPublica investigation called “Lost Mothers: Maternal Care and Preventable Deaths.”

Christen Smith: The Fallout of Police Violence Is Killing Black Women Like Erica Garner
During Erica Garner’s funeral, the Reverend Al Sharpton talked about Erica’s unflinching determination to get justice for her father. Sharpton said, while they say “she died of a heart attack, no, her heart was attacked that day,” referring to July 27, 2014, the day police killed her father, Eric Garner. In her recent article for The Conversation, titled “The fallout of police violence is killing black women like Erica Garner,” University of Texas at Austin professor Christen Smith writes. “When we think of police lethality, we typically consider the immediate body count: The people that die from bullets and baton blows. The death toll gives the impression that black men are the disproportionate victims of police killings. But these numbers do not reveal the slow death that black women experience. The long-range trauma police brutality causes can be as deadly as a bullet. The pain of loss kills with heart attacks, strokes, depression and even anemia.”

Web Exclusive | Breaking: Immigrant Rights Leader Ravi Ragbir Detained in New York
One of New York’s best-known immigrant rights advocates, Ravi Ragbir, the executive director of the New Sanctuary Coalition, was detained today while reporting to Immigration and Customs Enforcement for a scheduled check-in. Ravi legally immigrated to the United States from Trinidad and Tobago more than 25 years ago, but a 2001 wire fraud conviction made his green card subject to review. Even though he is married to a U.S. citizen and has a U.S.-born daughter, the government refuses to normalize his status. Just last year, Ravi was recognized with the Immigrant Excellence Award by the New York State Association of Black and Puerto Rican Legislators, given to those who show “deep commitment to the enhancement of their community.” You can follow the progress of this ongoing situation at Democracy Now!’s Twitter feed.