As Donald Trump secured a victory in Nevada with a strong margin, he was featured on the cover of a new report by the Southern Poverty Law Center, “The Year in Hate and Extremism.” 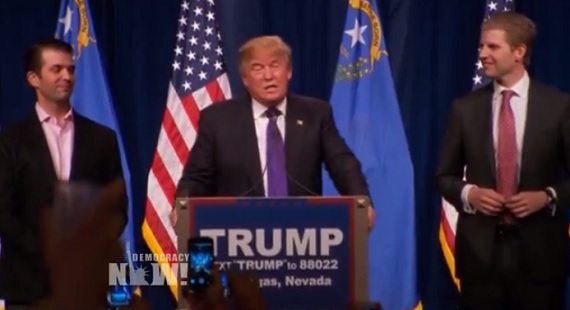 “I love the poorly educated!” Trump after his Nevada win. Image: video still

As Donald Trump secured a victory in Nevada with a strong margin, he was featured on the cover of a new report by the Southern Poverty Law Center, “The Year in Hate and Extremism.” The Investigation Discovery network will premiere a series titled “Hate in America,” — based on this report — on Monday, Feb. 29, at 8 p.m. Eastern.

Amy Goodman spoke to Richard Cohen, president of the Southern Poverty Law Center, who noted: “Over 60 percent of the people who support Trump believe that President Obama is a secret Muslim and wasn’t born in this country.”

Meanwhile, the FBI continues to pursue Apple, whose CEO Tim Cook recently described the government’s efforts to gain a backdoor to all mobile devices as the “software equivalent of cancer.” Former CIA agent Barry Eisler had this to say:

I think the fact that so many people, actually, that 38 percent, think it’s a really bad idea for Apple to be forced to do this is, in part, a tribute to the educational value of the Snowden revelations and all the journalism that’s been built on them, because I’m pretty sure — can’t really conduct this experiment, but I’m pretty sure that if it hadn’t been for Snowden’s revelations, the public would be focusing entirely on the keep-us-safe-from-the-terrorists aspect of this whole thing, and not on the but-this-is-going-to-destroy-privacy aspect.