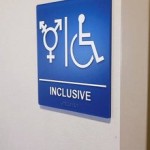 “Kids Will Be Harmed by This”: Trump Admin Rolls Back Protections for Transgender Students
The Trump administration has rescinded key protections for transgender students in public schools. The move reverses President Obama’s landmark decision last May to order public schools to let transgender students use the bathrooms matching their chosen gender identity. The Obama administration had threatened to withhold funding for schools that did not comply. According to press accounts, there was a split in the Trump administration over the issue between Attorney General Jeff Sessions and Education Secretary Betsy DeVos. The New York Times reports Devos initially resisted signing off and told Trump that she was uncomfortable because of the potential harm that rescinding the protections could cause transgender students. At a meeting on Tuesday in the White House, the president sided with Sessions and pushed DeVos to drop her opposition, which she did.

We Have to Keep Fighting: Water Protectors Vow Continued Resistance to #DAPL as Main Camp Is Evicted
In North Dakota, the main resistance camp set up by Lakota water protectors fighting the $3.8 billion Dakota Access pipeline has been largely vacated after protesters were ordered to leave the camp on Wednesday. Police arrested around 10 people. The U.S. Army Corps of Engineers and the North Dakota governor had imposed a noon eviction deadline for the hundreds of water protectors still living at the resistance camp. Prayers ceremonies were held on Wednesday, and part of the camp was set on fire before the eviction began. Water protectors say the resistance camp sits on unceded Sioux territory under the 1851 Treaty of Fort Laramie and that they have a right to remain on their ancestral land. A couple dozen people remain at the camp. The ongoing encampments in North Dakota were the largest gathering of Native Americans in decades. At its peak, more than 10,000 people were at the resistance camp. Earlier this month, construction crews resumed work on the final section of the pipeline, after the Trump administration granted an easement to allow Energy Transfer Partners to drill beneath the Missouri River.

Days After Pruitt Becomes EPA Head, Newly Released Emails Show His Ties to Koch Bros. & Energy Firms
Thousands of pages of newly released emails reveal how EPA Administrator Scott Pruitt closely collaborated with oil, coal and gas companies backed by the Koch brothers to roll back environmental regulations during his time as Oklahoma attorney general. The documents were released just days after Pruitt was sworn in as the new head of the EPA, the agency tasked with curtailing pollution and safeguarding public health. Last week, Senate Democrats unsuccessfully attempted to postpone Pruitt’s final confirmation until the emails were released, but Republicans pressed forward and confirmed him in a 52-46 vote, largely along party lines. As Oklahoma attorney general, Pruitt sued the EPA 14 times. The trove of new documents shows how energy companies drafted language for Pruitt’s Attorney General’s Office to use to sue the EPA over environmental regulations.

Madison, Wisc. to Pay $3.3M to Family of Tony Robinson, a Black Teenager Shot by Police
In Madison, Wisconsin, attorneys for the family of an American-American teenager who was shot dead by a city police officer have reached a $3.35 million settlement. Nineteen-year-old Tony Robinson was unarmed when officer Matt Kenny forced his way into an apartment following a “disturbance” in 2015. He was shot seven times. Prosecutors declined to charge Kenny, and he was cleared by the Madison Police Department’s Internal Affairs unit. This week’s settlement is the largest ever for an officer-involved killing in Wisconsin.

2 thoughts on ““Kids Will Be Harmed by This”: Trump Admin Rolls Back Protections for Transgender Students”