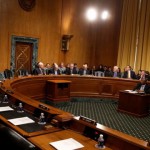 During a chaotic day on Capitol Hill, the Senate confirmed Exxon CEO Rex Tillerson by a vote of 56 to 43. Reuters reports it was the closest vote—by a wide margin—for a secretary of state nominee in at least a half-century.

During a chaotic day on Capitol Hill, the Senate confirmed Exxon CEO Rex Tillerson by a vote of 56 to 43. Reuters reports it was the closest vote—by a wide margin—for a secretary of state nominee in at least a half-century. The Senate Judiciary Committee also approved the nomination of Senator Jeff Sessions to be attorney general in a straight party-line vote.

Democratic lawmakers on the Senate Finance Committee boycotted committee votes on two of Donald Trump’s Cabinet picks: Steven Mnuchin for treasury secretary and Tom Price for health and human services secretary. The committee rules require at least one Democrat present to vote. Republicans on the committee then suspended the rules and voted to send the two nominations to the Senate floor.

Democrats on the Environment and Public Works Committee also boycotted a vote on Scott Pruitt to become head of the Environmental Protection Agency. Ryan Grim, Washington bureau chief for The Huffington Post, offers his views. His most recent piece is titled “After Trying Everything Else, Democrats Have Decided to Listen to Their Voters.”

Meet the Attorney Suing Trump for Barring Children from Entering U.S. to See Their Parents
New information is emerging that the U.S. State Department has provisionally revoked all nonimmigrant and immigrant visas of nationals from Iraq, Iran, Libya, Somalia, Sudan, Syria and Yemen. Matt Adams, legal director for the Northwest Immigrant Rights Project, is lead counsel for a class action lawsuit challenging the Trump administration’s executive order. His lawsuit was filed in Seattle on behalf of three parents legally living in the U.S. who are now restricted from bringing their children from Somalia, Syria and Yemen.

The “De-Judification” of the Holocaust?: Trump Avoids Word “Jews” on Holocaust Remembrance Day
Prominent white supremacist and Donald Trump supporter Richard Spencer has praised Trump for not mentioning in a statement commemorating International Holocaust Memorial Day the 6 million Jews killed. Trump has faced widespread criticism for the omission, but the administration has repeatedly defended the statement. Sen. Tim Kaine went as far as calling it a form of “Holocaust denial.” Spencer, however, praised the statement as the “de-Judification” of the Holocaust.

Nazis Once Published List of Jewish Crimes, Trump Now Pushing to Do the Same for Immigrant Crimes
The Trump administration has announced plans to publish a weekly list of crimes committed by unauthorized immigrants living in so-called sanctuary cities, where local officials and law enforcement are refusing to comply with federal immigration authorities’ efforts to speed up deportations. The plans for the weekly list, to be published by the Department of Homeland Security, were included in Trump’s executive orders signed last week.