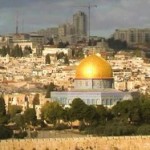 Palestinians are protesting in cities across the West Bank and Gaza Strip after Donald Trump announced Wednesday that he would recognize Jerusalem as the capital of Israel and move the U.S. Embassy from Tel Aviv to Jerusalem. The announcement sparked a massive international backlash.

PLO Leader Hanan Ashrawi: Trump’s Jerusalem Order Violates Int’l Law & “Destroys” Chance for Peace
Palestinians are protesting in cities across the West Bank and Gaza Strip after President Trump announced Wednesday that he would recognize Jerusalem as the capital of Israel and initiate a process of moving the U.S. Embassy from Tel Aviv to Jerusalem. The announcement sparked a massive international backlash, with leaders of Britain, France, Iran, Jordan, Egypt, the Arab League and other nations all criticizing the move. Meanwhile, Israeli Prime Minister Benjamin Netanyahu called it an “important step toward peace.” Hanan Ashrawi is a Palestinian politician and scholar. She was elected an Executive Committee member of the Palestine Liberation Organization in 2009, becoming the first woman to hold a seat in the highest executive body in Palestine. She also served as the official spokesperson of the Palestinian delegation to the Middle East peace process.

“Settlers in the White House”: Palestinians Denounce Trump Jerusalem Order & Protest in Day of Rage
As Palestinians protest President Trump’s announcement that he would recognize Jerusalem as the capital of Israel and begin moving the U.S. Embassy from Tel Aviv to Jerusalem, joining this segment are Budour Hassan, a Palestinian writer and project coordinator for the Jerusalem Center for Legal Aid and Human Rights, Rebecca Vilkomerson, executive director of Jewish Voice for Peace, and Hanan Ashrawi, Palestinian politician and scholar.

High-Profile Women Break the Silence on Sex Assaults, But Low-Wage Workers Still Vulnerable to Abuse
On Wednesday, Time magazine announced the 2017 “Person of the Year” goes to the women who have spoken out against sexual assault and harassment, sparking an international movement. It called the group “the Silence Breakers” and included Hollywood actresses, journalists, farmworkers and hotel cleaners. We look at how sexual abuse also thrives in low-wage sectors like farm work, hotel cleaning and domestic work, where workers are disproportionately women of color and immigrant women and are highly vulnerable to sexual harassment and sexual violence. Tarana Burke is founder of the “Me Too” movement and one of the women featured in Time’s new issue. She founded the organization in 2006 to focus on young women who have endured sexual abuse, assault or exploitation. She is now a senior director at Girls for Gender Equity.