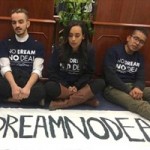 As Congress passes a massive rewrite of the U.S. tax code that could mean the largest transfer of wealth from the bottom to the top in history, it is also negotiating a spending measure that will not include the DREAM Act, which would grant legal status to recipients of DACA.

DACA Recipients’ Message to Democrats: Stop Playing with Our Lives, and Pass a Clean DREAM Act Now
As Congress passes a massive rewrite of the U.S. tax code that could mean the largest transfer of wealth from the bottom to the top in history, it is also negotiating a stopgap spending measure that will not include the DREAM Act, which would grant legal status to recipients of the Deferred Action for Childhood Arrivals program, or DACA. This comes as seven young DACA recipients and one ally were released from jail Wednesday after six days in jail on hunger strike. The eight were arrested Friday during nonviolent sit-in protests inside the offices of Democratic lawmakers, demanding they commit to voting “no” on the spending bill this month unless it includes a version of the DREAM Act without concessions for funding for the border wall or enhanced border security. Erika Andiola is one of the eight activists just released and a nationally known immigrant activist who served as a spokesperson for Bernie Sanders and helped him craft immigration policy. She is the political director for Our Revolution. She is a DACA recipient who grew up in Arizona, where her house was raided in 2013 and immigration agents picked up her mother and brother.

Jailhouse Interview: Denied Asylum, Mexican Reporter Emilio Gutiérrez Faces Death If ICE Deports Him
This week, Mexican journalist Gumaro Pérez Aguinaldo was assassinated in the southern state of Veracruz, becoming at least the 12th journalist to be killed in Mexico so far this year. Reporters Without Borders says the killing puts Mexico alongside Syria as the most murderous country for journalists. Emilio Gutiérrez Soto is fighting his deportation to Mexico as he is being held in a U.S. detention center in El Paso, Texas. Gutiérrez first sought asylum in the United States in 2008 after receiving death threats for reporting on alleged corruption in the Mexican military. He was detained then and eventually released while his asylum appeal was pending. The Trump administration denied asylum to the award-winning reporter last week.

ACLU Investigation Reveals Texas Troopers Are Turning Traffic Stops of Immigrants into Deportations
A shocking new investigation by the ACLU of Texas and The Intercept reveals how state troopers are essentially acting as deportation officers. After poring through public records of traffic stops by the Texas Highway Patrol, the ACLU of Texas uncovered what amounts to a deportation machine operated by the state’s Department of Public Safety. State troopers stop drivers for minor traffic infractions, and if they are unable to produce a driver’s license, they are taken into custody and turned over to Border Patrol. Several DPS dashboard camera videos show immigrants being detained for trivial traffic violations and then carted away by Border Patrol.