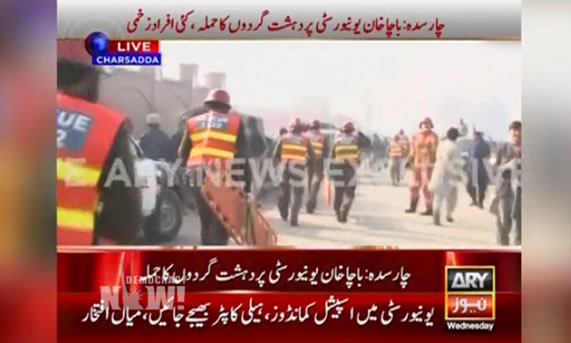 Pakistan is once again mourning mass casualties from an armed assault on one of its schools. At least 20 people were killed and dozens injured on Wednesday when gunmen stormed the northwest Bacha Khan University under the cover of morning fog. The four attackers scaled the school’s rear wall before storming through the campus, gunning down students and teachers in classrooms and halls. The attack comes just weeks after Pakistan marked the first anniversary of the December 2014 Taliban massacre at a school in Peshawar. More than 150 people were killed in the massacre, most of them children from military families. It was the deadliest militant attack in Pakistan’s history. The Taliban faction that committed the Peshawar massacre has also taken responsibility for Wednesday’s attack, calling it revenge for the military’s intensified crackdown on its members. We are joined by two guests: Jibran Nasir, a Pakistani political activist and lawyer, and Tariq Ali, a political commentator, historian, activist, filmmaker, novelist and author of several books on Pakistani politics and history.