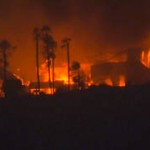 In California, tens of thousands of residents have been forced to evacuate as deadly wildfires continue to rage across the state. The worst wildfire, the Carr Fire, has engulfed more than 100,000 acres and destroyed more than a thousand homes in and around Redding, California.

Climate Scientist: California Wildfires Are Faster, Stronger, Deadlier & Will Continue to Intensify
In California, tens of thousands of residents have been forced to evacuate as deadly wildfires continue to rage across the state. The worst wildfire, the Carr Fire, has engulfed more than 100,000 acres and destroyed more than a thousand homes in and around Redding, California, making it the sixth most destructive fire in the state’s history. Authorities said Wednesday that 16 of the largest wildfires burning in California have scorched 320,000 acres—an area larger than Los Angeles. Eight people have died. Governor Jerry Brown called the growing intensity and frequency of California wildfires the state’s “new normal” this week. More fires continue to consume parts of Colorado, Idaho, Oregon, Washington and Arizona, along with recent blazes across the globe in Greece, Canada and the Arctic Circle.

Rob Nixon: Gov’t Inaction on Climate Change Is “Slow Violence” That Hits World’s Poor the Hardest
With unprecedented fires, floods and heat waves sweeping the globe, 2018 is on track to be the fourth-hottest year on record. The regions most affected by the disastrous effects of global warming are overwhelmingly not the countries that have contributed the most to climate change. According to the 2018 Global Climate Risk Index released by the public policy group Germanwatch, the nine countries most affected by climate change in the past 20 years are developing nations, including Honduras, Haiti, Burma, Pakistan and Bangladesh. The Indian government says more than 500 people have died as a result of flooding and heavy rains in recent weeks. In Iran, there is a chronic shortage of water, and it is estimated there is some form of drought in 97 percent of the country.

“Losing Earth”: How Humanity Came to Understand Climate Change & Failed to Act in Time
“Losing Earth.” That’s the title of The New York Times Magazine article by Nathaniel Rich published August 1 in a special edition of the magazine dedicated entirely to climate change. The story tracks the 10-year period from 1979 to 1989, the decade Rich claims that humankind first came to a comprehensive understanding of climate change but failed to address its extreme dangers while there was still time. The story was produced with the support of the Pulitzer Center.

Extreme Weather Is Exploding Around the World. Why Isn’t the Media Talking About Climate Change?
Major corporate broadcast networks reported on July’s 2-week global heat wave at least 127 times, but mentioned climate change only once. That’s according to a report by Media Matters, which tracked coverage of the extreme weather by ABC, CBS and NBC. We host a panel discussion on the media’s role in the climate change crisis, the fossil fuel industry and global warming-fueled extreme weather across the globe.