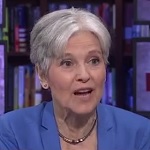 While polls show Donald Trump and Hillary Clinton are among the least popular major-party candidates to ever run for the White House, it appears no third-party candidates will be invited to take part in the first presidential debate next month. However, Libertarian presidential candidate Gary Johnson and the Green Party’s Jill Stein have both witnessed recent surges in support. 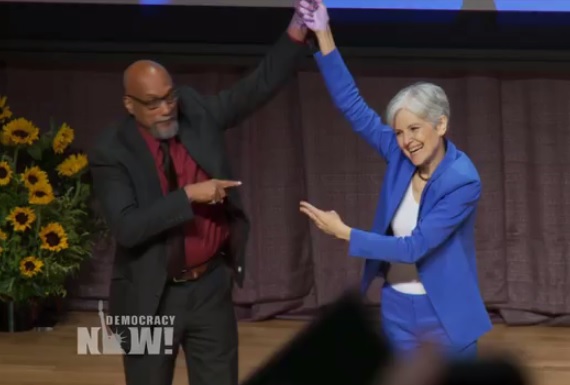 Dr Jill Stein and her running-mate, Ajamu Baraka, who both join today’s show.

While polls show Donald Trump and Hillary Clinton are among the least popular major-party candidates to ever run for the White House, it appears no third-party candidates will be invited to take part in the first presidential debate next month. The debates are organized by the Commission on Presidential Debates, which is controlled by the Democratic and Republican parties. Under the commission’s rules, candidates will only be invited if they are polling at 15 percent in five national surveys.

Libertarian presidential candidate Gary Johnson and the Green Party’s Jill Stein have both witnessed recent surges in support, but neither have crossed the 15 percent threshold. More than 12,000 people have signed a petition organized by RootsAction calling for a four-way presidential debate. Amy Goodman spoke to Green Party presidential nominee Dr. Jill Stein. Four years ago she was arrested outside a presidential debate protesting her exclusion from the event.

The Green Party’s vice-presidential nominee Ajamu Baraka is a longtime human rights activist. He is the founding executive director of the U.S. Human Rights Network and coordinator of the U.S.-based Black Left Unity Network’s Committee on International Affairs. For years, Baraka has led efforts by the U.S. Human Rights Network to challenge police brutality and racism in the United States by bringing these issues to the United Nations. Stein and Baraka also discuss the question of Bernie Sanders supporters and tactical voting.

Over the last few weeks, the U.S.-backed, Saudi-led coalition in Yemen has killed dozens of civilians and bombed at least one school and one hospital supported by Doctors Without Borders. A number of activists, politicians and news outlets, including The New York Times, are calling on the United States to stop arms sales to Saudi Arabia over the ongoing conflict. But Green Party presidential nominee Jill Stein is going even further—calling on the U.S. to stop all funding for Israel and Saudi Arabia.

Finally today, the show looks at a growing protest in North Dakota, where hundreds of indigenous activists have shut down construction on a multibillion-dollar pipeline project. The $3.8 billion Dakota Access pipeline is slated to carry half a million barrels of Bakken crude from North Dakota to Illinois. But members of the Standing Rock Sioux Tribe say the pipeline threatens to contaminate the Missouri River, which provides water not only for thousands of residents on the reservation, but also for millions of people living downstream.

On April 1, members of the Standing Rock Sioux Tribe launched an ongoing protest camp called Sacred Stone. Since late July, when the U.S. Army Corps of Engineers approved the pipeline, at least 28 people have been arrested as they have used their bodies and horses to block construction.

Eric has now completed the 2016 Midyear Reading, BALANCE. Get all 12 signs for the bargain price of just $57 while you still can. Image from the 2012 Blue Marble by NASA Goddard Space Flight Center.