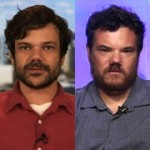 As Donald Trump faces growing outrage over his response to the deadly white supremacist rally in Charlottesville, Virginia, Democracy Now! hosts an exclusive interview with the great-great-grandsons of Confederate General Stonewall Jackson. At least 1,500 symbols of the Confederacy can be found in public spaces across the country.

Exclusive: Stonewall Jackson’s Great-Great-Grandsons Call for Removal of Confederate Monuments
As Donald Trump faces growing outrage over his response to the deadly white supremacist rally in Charlottesville, Virginia, Democracy Now! hosts an exclusive interview with the great-great-grandsons of Confederate General Stonewall Jackson. At least 1,500 symbols of the Confederacy can be found in public spaces across the country. But now a number of the monuments are coming down. Calls for the removal of the statues are even coming from the descendants of the leaders of the Confederacy. Two of the great-great-grandsons of Confederate General Stonewall Jackson, Jack and Warren Christian, have just written an open letter to the mayor of Richmond calling for the removal of the Stonewall Jackson statue in Richmond. They write, “Our sense of justice leads us to believe that removing the Stonewall statue and other monuments should be part of a larger project of actively mending the racial disparities that hundreds of years of white supremacy have wrought.”

Life After Hate: Trump Admin Stops Funding Former Neo-Nazis Who Now Fight White Supremacy
Heather Heyer is the latest casualty in a number of deaths at the hands of white nationalists. Foreign Policy recently published an FBI and Department of Homeland Security bulletin that concluded white supremacist groups were “responsible for 49 homicides in 26 attacks from 2000 to 2016…more than any other domestic extremist movement.” Despite these findings, the Trump administration recently slashed funds to organizations dedicated to fighting right-wing violence. One group, Life After Hate, which works to help white nationalists and neo-Nazis disengage from hate and violent extremism, was set to receive a grant under the DHS’s Countering Violent Extremism program, approved by the Obama administration. When Trump DHS policy adviser Katharine Gorka released the final list of grantees in June, Life After Hate had been eliminated. Gorka is the wife of Trump adviser Sebastian Gorka, who has been linked to a Hungarian far-right, Nazi-allied group.

“Vile, Hateful & Racist”: A Fargo Family Disowns White Supremacist Relative After Charlottesville
One of the participants in the white supremacist rally in Charlottesville was a man named Peter Tefft. He was outed by the Twitter group “Yes, You’re Racist,” which had been posting screenshots of participants in an effort to expose them. His father, Pearce Tefft, has come out and publicly denounced his white supremacist son in an open letter published in The Forum, a newspaper in Fargo. The letter read, in part, “I, along with all of his siblings and his entire family, wish to loudly repudiate my son’s vile, hateful and racist rhetoric and actions. We do not know specifically where he learned these beliefs. He did not learn them at home.”