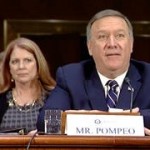 Confirmation hearings begin today for Mike Pompeo, the CIA director, tapped by President Trump to become the next secretary of state. Last year the Senate confirmed Pompeo to head the CIA by a vote of 66 to 32, but the vote is expected to be far closer this year.

Will Senate Dems Block Confirmation of Climate-Denying, Torture-Backing State Dept Pick Mike Pompeo?
Confirmation hearings begin today for Mike Pompeo, the CIA director, tapped by President Trump to become the next secretary of state. Last year the Senate confirmed Pompeo to head the CIA by a vote of 66 to 32, but the vote is expected to be far closer this year. At least one Republican—Rand Paul—has already announced he will vote against Pompeo due to his support for the Iraq invasion and for torture. Pompeo also has a long history of ties to Islamophobic organizations, and the National Iranian American Council has warned that Pompeo’s confirmation would threaten the Iran nuclear deal and increase the risk of a U.S. attack on Iran.

“A Tremendously Dangerous Situation”: As Trump Threatens Syria, U.S.-Russian Relations Deteriorate
Vermont independent Senator Bernie Sanders has warned the White House against any attack on Syria without a declaration of war from Congress. On Wednesday, Sanders tweeted, “President Trump has no legal authority for broadening the war in Syria. It is Congress, not the president, who determines whether our country goes to war, and Congress must not abdicate that responsibility.”

Political Scientist Corey Robin: Paul Ryan Is Retiring After Failing to Fulfill Right-Wing Agenda
In news that has sent shock waves through Capitol Hill, House Speaker Paul Ryan has announced he will not seek re-election this fall. Over 40 House Republicans have announced they will resign or retire, including nine chairmen of committees, leading many to speculate Republicans are fearing a blue wave will bring a Democratic majority to power in November. The most prominent Republican contender for Ryan’s seat is Paul Nehlen, a white nationalist and anti-Semite who has called for deporting all Muslims from the United States.

Corey Robin: Striking Teachers Are “Real Resistance” to “Incoherent” Republicans and “Gutted” Dems
In the continuing teachers’ rebellion sweeping the U.S., dozens of Oklahoma teachers have completed a 7-day, 110-mile march from Tulsa to the state capital Oklahoma City. Public schools across Tulsa and Oklahoma City remain closed as thousands of teachers continue their strike for education funding into a ninth day. The strike comes as the Supreme Court is considering Janus v. AFSCME, a case that could deal a massive blow to public unions nationwide—and as President Trump is successfully appointing right-wing judges to federal courts, reshaping the judiciary for decades to come.