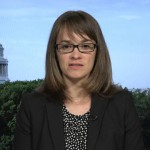 Dr. Christine Blasey Ford has agreed to testify before the Senate Judiciary Committee on Thursday about her allegations that Kavanaugh attempted to rape her when she was 15 years old and he was 17 years old.

“Survivors Must Be Heard”: 1,100 Alumnae of Dr. Blasey Ford’s H.S. Demand FBI Investigate Kavanaugh
Dr. Christine Blasey Ford has agreed to testify before the Senate Judiciary Committee on Thursday about her allegations that Kavanaugh attempted to rape her when she was 15 years old and he was 17 years old. More than 1,100 alumnae of the Holton-Arms School, the Maryland prep school that Blasey Ford graduated from in 1984, have signed a letter in support of her sexual assault claims against Kavanaugh, saying they are grateful that she came forward to tell her story. In a letter, they wrote, “It demands a thorough and independent investigation before the Senate can reasonably vote on Brett Kavanaugh’s nomination to a lifetime seat on the nation’s highest court. Dr. Blasey Ford’s experience is all too consistent with stories we heard and lived while attending Holton. Many of us are survivors ourselves.” Holton-Arms School alumna Alexis Goldstein in Washington, D.C. speaks out. She helped organize the letter campaign in support of Blasey Ford. Jodi Jacobson, president and editor-in-chief of Rewire also comments.

Report: Senate Aides Knew of Second Kavanaugh Sexual Assault Claim & Tried to Rush His Confirmation
Senator Dianne Feinstein is calling for the immediate postponement of the nomination proceedings of Supreme Court nominee Brett Kavanaugh after a second woman has come forward alleging sexual misconduct by the judge. Deborah Ramirez, a former classmate of Kavanaugh’s at Yale University, has accused him of exposing himself and thrusting his penis into her face during a college party in a dorm room. Ramirez spoke on the record to The New Yorker and is now calling on the FBI to investigate her allegations. The New Yorker revealed Republican Senate aides learned of Ramirez’s allegations last week and responded by trying to quickly move Kavanaugh’s nomination ahead before the allegations became public. This comes as Dr. Christine Blasey Ford has agreed to testify before the Senate Judiciary Committee on Thursday about her allegations that Kavanaugh attempted to rape her when she was 15 years old and he was 17 years old. Kavanaugh has denied both accusations.

Dr. Barbara Ransby: What the Defamation of Anita Hill Can Teach Us About the Kavanaugh Hearings
News that Dr. Christine Blasey Ford will testify Thursday against Supreme Court nominee Judge Brett Kavanaugh has prompted many to warn senators not to repeat the mistakes of the Anita Hill hearings of 1991, when Hill was questioned by an all-male, all-white Senate Judiciary Committee over her allegations that then-Supreme Court nominee Clarence Thomas had sexually harassed her in the workplace. In the weeks after Hill testified, nearly 1,600 black feminists organized as “African American Women in Defense of Ourselves” and signed a manifesto published in an advertisement in The New York Times. Activist Barbara Ransby is one of the initiators of the manifesto, who is now a professor of African American studies, gender and women’s studies and history at the University of Illinois, Chicago.

Eric’s 2018 Autumn Reading, Empathy-Pathos, is now available for pre-order. This will be a 12-sign audio reading covering Venus retrograde and beyond. Pre-order all 12 signs now for just $88 — we will increase the price very soon.