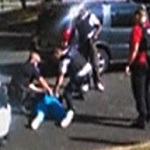 On Friday, NBC released a gut-wrenching cellphone video by Rakeyia Scott witnessing her husband, Keith Lamont Scott, being shot and killed by Charlotte-Mecklenburg police. Following pressure, the police department has also released two videos. You might need a strong stomach to watch or listen. 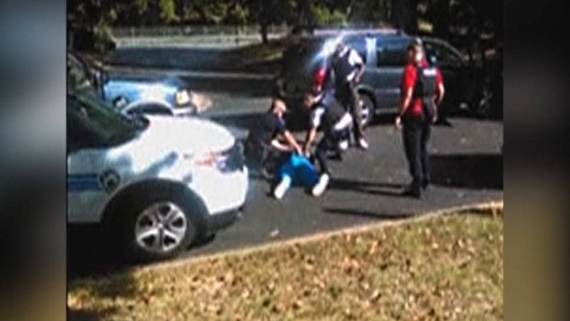 Rakeyia Scott had to witness the police killing of her husband, and bravely kept recording. Image from Democracy Now! website.

On Friday, NBC released a gut-wrenching cellphone video by Rakeyia Scott witnessing her husband, Keith Lamont Scott, being shot and killed by Charlotte-Mecklenburg police. “She was trying to do what police somehow couldn’t do, which was de-escalate the situation. … It’s really a remarkable act of courage and clearheadedness by his wife,” says Marc Lamont Hill, journalist, distinguished professor of African American studies at Morehouse College. He notes this is not the first time an African-American wife has had to watch state violence take place in real time against her spouse, while being ignored and disrespected by officers:

You know, again, we watch this over and over again—and not just at the current moment, but throughout history—black women, in particular, watching their spouses killed at the hands of the state and then being thoroughly disrespected and marginalized even in real time. She couldn’t go over and attend to him. She couldn’t talk to him. They’re more worried about telling her to stay away. Same thing happened with Philando Castile: “Stay away. Don’t film. Don’t come near us.” That kind of attitude and that kind of sensibility makes it difficult to believe that the police were invested in de-escalation at any point that day.

Charlotte-Mecklenburg police have yielded to days of protests and released two videos of the fatal police shooting of Keith Lamont Scott. One video is from a police dashboard camera, the other from an officer’s body camera. Police say they also have more video that they have not released. The Scott family is asking the police to release all of the videos. The dashboard camera video shows Scott exiting his vehicle and taking steps backward with his arms at his sides. Police fire four shots at Scott, and he falls to the ground. The body camera video shows Scott on the ground after being shot. “The lesson is: Activism works. Organizing works. Grassroots efforts work,” says Marc Lamont Hill.

Tonight, 100 million people are expected to watch the first presidential debate, where the topics will likely include foreign policy and terrorism. Eight years after President Obama vowed to close Guantánamo during his first year in office, it remains open. Meanwhile, Republican presidential candidate Donald Trump has called for the prison’s expansion. Democracy Now! releases the full exclusive interview with former Guantánamo prisoner Jihad Abu Wa’el Dhiab, held for over 12 years but never charged with a crime.