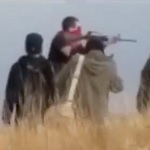 On Friday, Amnesty International dispatched human rights observers to monitor the ongoing repression of the thousands of Native Americans resisting the $3.8 billion Dakota Access pipeline, following Thursday’s attack by hundreds of militarized police. Now a Dakota Access security contractor has apparently attempted to infiltrate the camp armed with a rifle.

More details are emerging from Thursday, including video footage of a man who appears to be a Dakota Access security contractor holding a rifle, with his face covered by a bandana, apparently attempting to infiltrate a group of water protectors. A Standing Rock Sioux tribal member says he saw the man driving down Highway 1806 toward the main resistance camp with an AR-15 rifle on the passenger side of his truck. Protectors chased down his truck and then pursued him on foot in efforts to disarm him.

In the video, the man can be seen pointing the rifle at the protectors as he attempts to flee into the water. He was ultimately arrested by Bureau of Indian Affairs police. Protectors say inside the man’s truck they found a DAPL security ID card and insurance papers listing his vehicle as insured by DAPL. Dallas Goldtooth, organizer with the Indigenous Environmental Network, spoke with Amy Goodman.