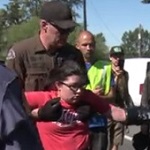 On Saturday, presumptive Republican presidential nominee Donald Trump made his first campaign visit to Washington state. Meanwhile, dozens of #StopTrump activists blockaded a highway in Lynden as Trump held a rally in the rural community near the Canadian border. 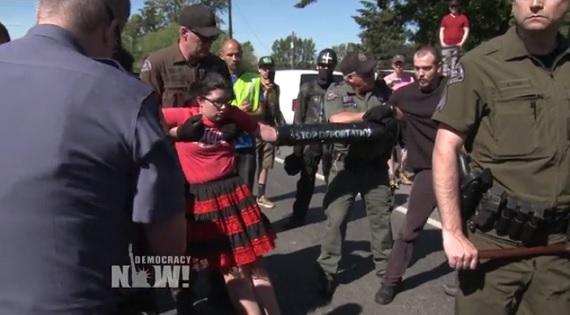 On Saturday, presumptive Republican presidential nominee Donald Trump made his first campaign visit to Washington state, where he addressed thousands of supporters in Spokane and later in Lynden. He decried the loss of manufacturing jobs, and vowed to win Washington state in November. He also warned of the threat posed by Syrian refugees. Meanwhile, dozens of #StopTrump activists blockaded a highway in Lynden as Trump held a rally in the rural community near the Canadian border.

Three activists were arrested after they used chains and PVC pipe “lockboxes” to form a human chain across two lanes of traffic. They said their action was a protest against what they described as a campaign rooted in fear and hatred. The protest held up traffic for more than a half-hour, delaying many Trump supporters.

Thomas Kaplan: We’re particularly drawing attention to Lynden, because here has been the center of Ku Klux Klan rallies and organizing for at least a hundred years, and right now it’s a hotbed for racism against farmworkers. We’re not going allow Donald Trump to come to our community and spread hate and try to encourage the detention or the terrorism towards people of color and undocumented persons.

Also, Saturday marked an international day of action to boycott Driscoll’s — the largest berry distributor in the world. Legal challenges have been brought against the corporation since 2013 due to alleged labor law violations. As one worker explained: “The demand is that they sign a union contract with us and that they give us good conditions for housing and work, better salaries, medical plans, pensions, and that they remove our children from the fields. We don’t want our children working in agriculture, picking fruit and vegetables for this country, until they are at least 16 years old. That’s what we want.”

Finally, more than 800 people packed into the Church of St. Francis Xavier in New York on Friday for the funeral of Daniel Berrigan, the legendary antiwar priest, poet and activist. He died on April 30 at the age of 94. Today would have been his 95th birthday. Here is the Democracy Now! special report from May 3, featuring interviews with his friends and his niece.