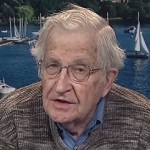 Today, President Obama passed a significant milestone: he has now been a president at war for longer than every other. There is now also a new threat in terms of nuclear armaments. Amy Goodman interviews Noam Chomsky on this and the other current major threat to our species: global warming. 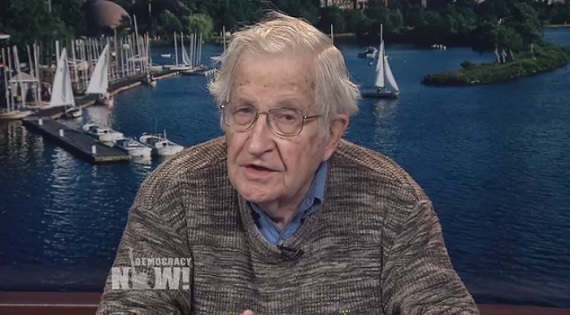 President Obama has just passed a significant milestone: he has now been a president at war for longer than every other, including George W. Bush. Obama has taken military action in at least seven countries: Iraq, Afghanistan, Libya, Syria, Pakistan, Yemen and Somalia. He has overseen increased military engagement in several countries, which may have exacerbated the current refugee crisis.

There is now also a new threat in terms of nuclear armaments. Amy Goodman interviews Noam Chomsky on this and the other current major threat to our species: global warming.

The nuclear threat is the threat of—on the Russian border, which happens to be the invasion route through which Russia was virtually destroyed twice last century by Germany alone—well, Germany as part of a hostile military alliance—on that border, both sides are acting as if a war is thinkable. The U.S. has just sharply increased; it quadrupled military expenses on its side. The Russians are doing something similar. There are constant near collisions, jets coming close to colliding with one another. A Russian jet a couple months ago virtually hit a Danish commercial airliner. U.S. troops are carrying out maneuvers virtually on the Russian border. That threat is escalating and very serious. William Perry, a respected nuclear specialist, a former defense secretary, recently estimated that the threat is higher than it was during the 1980s. There are also confrontations near the Chinese around China, South China Sea and so on. That’s one major threat.

The other is what you just described. The threat of global warming is very serious. Every time one reads a science journal, there’s an even more alarming discovery. Virtually all the ice masses are melting. The Arctic ice mass, which was assumed to be pretty stable, is actually melting very fast, much more than was thought. The glaciers are melting. There’s severe droughts. Right now already, about 300 million people in India are on the edge of starvation from drought, which has been going on for years. The groundwater is depleted as the Himalayan glaciers melt, as they’re doing. It will undermine the water supply for huge areas in South Asia. If people think there’s a migration crisis now, they haven’t seen anything. The sea level is rising. Chances are it could rise three to six feet, maybe more, by the end of the century—some estimate even sooner. It will have a devastating effect, not just on coastal cities, but on coastal plains, like, say, Bangladesh, where hundreds of millions of people will be severely threatened. I mean, this is a—we’re already killing other species at the level of the so-called fifth extinction. Sixty-five million years ago, when an asteroid hit the Earth, devastating consequences ended the age of the dinosaurs, opened the way for small mammals to develop, ultimately evolve, finally evolve into Homo sapiens, which now is acting the same way the asteroid did. That’s the fifth extinction. It’s going to get worse. All of these are—the rate of global warming today is far faster, maybe a hundred or more times as fast as any moderately comparable period that can be estimated in the geological record.

Chomsky also commented extensively on the presidential race. He said Domald Trump wants to “march toward destruction of the species.” He also criticized Hillary Clinton on Israel.