In the latest Presidential primaries, Bernie Sanders won landslide victories in Washington, Alaska and Hawaii. Despite these being big steps for his campaign, the media downplayed the results. 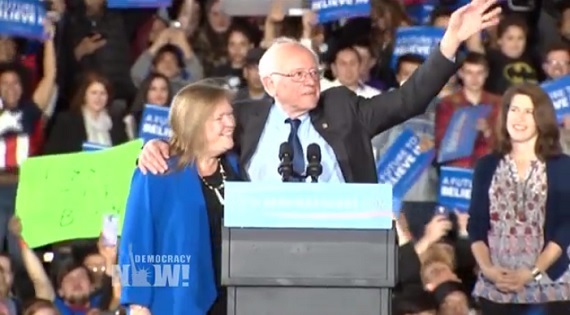 In the latest Presidential primaries, Bernie Sanders won landslide victories in Washington, Alaska and Hawaii. Despite these being big steps for his campaign, the corporate media mostly downplayed the results. Today’s show airs part of his victory address in Madison, Wisconsin.

Also today, Amy Goodman talks to Angela Davis on why she does not endorse any candidate. “I believe in independent politics,” she says. “I still think that we need a new party, a party that is grounded in labor, a party that can speak to all of the issues around racism, sexism, homophobia, transphobia, what is happening in the world. We don’t yet have that party.”

Davis also discusses her long-term support of Assata Shakur. Shakur was part of the Black Panther Party and the Black Liberation Army. She now lives in Cuba, where she has political asylum.