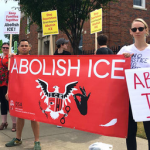 President Trump’s “zero tolerance” crackdown on immigrants and asylum seekers continues as parents of more than 2,000 separated children say they still don’t know where their kids are. Trump now says migrants should be deported without judges.

Undocumented Mother: Stop Separation of Migrant Children by Dropping Charges Against Their Parents
President Trump’s “zero tolerance” crackdown on immigrants and asylum seekers continues as parents of more than 2,000 separated children say they still don’t know where their kids are. Trump now says migrants should be deported without judges. Maru Mora Villalpando is an undocumented immigrant and mother with the group Mijente and Northwest Detention Center Resistance. She has a hearing in her own immigration case on Tuesday and says the best way to stop the separation of children from their families at the border is to drop the charges against their parents.

50 Years After MLK’s Poor People’s Campaign, 2,500+ Arrested Over 6 Weeks Calling for Moral Revival
This show features voices of the thousands who marched on the nation’s capital Saturday for the Poor People’s Campaign. The mass demonstration followed six weeks of actions around the country and more than 2,500 arrests, as protesters join what they are calling a “moral revival” to demand an end to systemic racism, poverty, the war economy and ecological devastation. The march brought together activists from around the country more than 50 years after demonstrators converged on Washington, D.C., in 1968 to take up the cause that Rev. Dr. Martin Luther King Jr. had been fighting for when he was assassinated on April 4, 1968: the original Poor People’s Campaign. Demonstrators rallied to protest widespread poverty just days after U.S. Ambassador Nikki Haley slammed a new U.N. report slamming the Trump administration’s policies for worsening the state of poverty in the United States.

“The King” Director Eugene Jarecki: Elvis Presley’s Rise and Fall Is a Metaphor for America Today
To understand America in the age of Trump, prize-winning documentary filmmaker Eugene Jarecki says to look no further than the checkered history of Elvis Presley. Jarecki’s new documentary “The King” opens in New York City this week. It follows the filmmaker as he drives Elvis Presley’s 1963 Rolls Royce across the United States in an attempt to understand what has happened to America in the age of Trump. “The American dream…wasn’t for anybody if you weren’t a white man,” Jarecki said. “We got here because this nation puts power and money ahead of democracy. We have been hijacked by capitalism.” We speak with Jarecki about Elvis, cultural appropriation, the civil rights movement and the story of this country.