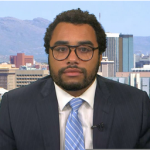 A youth care worker who quit his job at a Tucson detention center for unaccompanied minors is speaking out about inadequate facilities, untrained staff and inhumane policies, after witnessing the devastation of family separations firsthand.

Democratic Lawmakers Join Family Separation Protests at Detention Centers from Texas to New Jersey
Protests have erupted nationwide against the Trump administration’s new policy of separating children from their parents at the U.S.-Mexico border. Most of the parents apprehended by Customs and Border Patrol are now charged with criminal entry—and, in many cases, criminal re-entry—then taken to jails or prisons to serve their time before they are sent to immigrant detention centers. In the meantime, their children are being sent to shelters and foster care programs around the country. The Associated Press reports that between April 19 and May 31, nearly 2,000 children were separated from their parents. Hundreds of protesters also met at a family processing center in McAllen, Texas, where nearly half of all children have been removed from their parents. And in New Jersey, a group of Democratic lawmakers visited a private immigrant detention facility in the town of Elizabeth to speak with asylum-seeking parents held there after they were separated from their children. Meanwhile, on Sunday, in Houston, people marched in the rain outside a former warehouse and homeless shelter where the government plans to detain hundreds of separated children, including many who are a so-called tender age—children who are younger than 12 years old.

Meet the Migrant Child Detention Center Whistleblower Now Speaking Out Against Family Separations
A youth care worker who quit his job at a Tucson detention center for unaccompanied minors is speaking out about inadequate facilities, untrained staff and inhumane policies, after witnessing the devastation of family separations firsthand. Antar Davidson says he quit after he was forced to tell children who were separated from their mother not to hug one another. The facility is run by Southwest Key, a nonprofit that operates 27 facilities and has signed a lease to detain hundreds of separated children, including many who are a younger than 12 years old, in a “baby jail” in a former warehouse and homeless shelter in Houston. For more, we speak with Antar Davidson.

With Spotlight on Migrant Families Separated at the Border, Will Democrats Push to Abolish ICE?
On Saturday, President Trump blamed the widely condemned family separation practice on Democrats, tweeting, “Democrats can fix their forced family breakup at the Border by working with Republicans on new legislation.” Trump is set to meet Tuesday with Republican lawmakers to discuss a so-called compromise immigration bill they claim would end family separation while lifting limits on how long families can be detained, and which also includes a promise of $25 billion for Trump’s border wall. Democracy Now! correspondent Renée Feltz discusses a history of family separation that has stemmed from previous legislative compromises with Democrats, and looks ahead to calls for them to defund Immigration and Customs Enforcement (ICE), if they gain control of the House in November.

“Civilian Lives No Longer Matter”: Millions at Risk as Saudi-Led Coalition Attacks Yemeni Port City
Hundreds of fighters have been killed and more than 4,000 civilians have fled their homes in the Yemeni port city of Hodeidah since the U.S.-backed coalition, led by Saudi Arabia and the United Arab Emirates, launched an all-out offensive last week. Coalition aircrafts bombarded Hodeidah’s main airport Monday, wounding dozens and preventing aid organizations from reaching parts of the city.