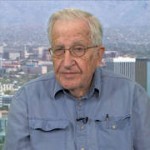 Noam Chomsky: U.S. Must Improve Relations with Russia and Challenge the Expansion of NATO
Russian President Vladimir Putin has invited President Trump to Moscow just days after the White House postponed a planned meeting between the two leaders in Washington until after the midterm elections. The invitation to Moscow comes after Trump and Putin met for a summit in Helsinki, Finland, earlier this month. World-renowned political dissident, author, and linguist Noam Chomsky speaks about US-Russia relations. He is a laureate professor in the Department of Linguistics at the University of Arizona and Professor Emeritus at Massachusetts Institute of Technology, where he taught for more than 50 years.

Noam Chomsky: Survival of Organized Human Life is at Risk Due to Climate Change & Nuclear Weapons
At least eight people have died in California as climate change-fueled wildfires rage statewide. In total, firefighters are battling seventeen wildfires blazing across California, engulfing more than 200,000 acres and forcing mass evacuations, including in Yosemite National Park. The fires comes amid a surge of deadly extreme weather worldwide, including in India, where more than 500 people have died as a result of flooding and heavy rains in recent weeks. Scientists have linked increased flooding and rainfall to climate change.

Noam Chomsky Condemns Israel’s Shift to Far Right & New “Jewish Nation-State” Law
Israel has passed a widely-condemned law that defines Israel as the nation-state of the Jewish people and gives Jews the sole right to self-determination. It also declares Hebrew the country’s only official language and encourages the building of Jewish-only settlements on occupied territory as a “national value.” The law has drawn international condemnation and accusations that Israel has legalized apartheid.

Amid Deadly Israeli Crackdown on Gaza Protests, Chomsky Says U.S. Must End Support for “Murderers”
In Gaza, thousands gathered Saturday for the funeral of 11-year-old Majdi al-Satari, who died after he was shot in the head by an Israeli sniper Friday at protests near the separation fence with Israel. 17-year-old Moumin al-Hams and 43-year-old Ghazi Abu Mustafa were also shot and killed by Israeli snipers at the protests. In total, Israeli soldiers have killed at least 150 Palestinians since the Palestinians’ nonviolent Great March of Return protests began on March 30.

2 thoughts on “Noam Chomsky: U.S. Must Improve Relations with Russia and Challenge the Expansion of NATO”