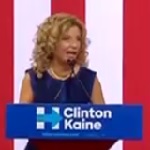 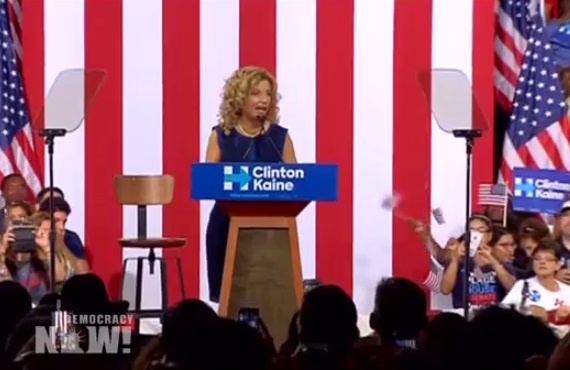 The Democratic National Convention is opening today in Philadelphia, Pennsylvania, amid massive party turmoil. Democratic National Committee chairwoman and Florida Congresswoman Debbie Wasserman Schultz has resigned following the release of nearly 20,000 emails revealing how the Democratic Party favored Hillary Clinton and worked behind the scenes to discredit and defeat Bernie Sanders. The emails were released Friday by WikiLeaks.

Amy and Juan interviewed Julian Assange on — among other matters — the rumor that the documents were leaked by Russia to assist Donald Trump. When asked about his opinion on Clinton versus Trump, he had this to say:

Well, you’re asking me, do I prefer cholera or gonorrhea? Personally, I would prefer neither. Look, I think—you know, we know how politics works in the United States. Whoever—whatever political party gets into government is going to merge with the bureaucracy pretty damn fast. It will be in a position where it has some levers in its hand. And so, as a result, corporate lobbyists will move in to help control those levers. So it doesn’t make much difference in the end. What does make a difference is political accountability, a general deterrence set to stop political organizations behaving in a corrupt manner. That can make a difference, because that changes the perception of what you can do or not do. And so, always—well, almost always, you should choose the principled position, which is to set a disciplinary signal about acting in a corrupt way, and take a philosophical position, which is our institutions can only be as good as our understanding of our institutions.