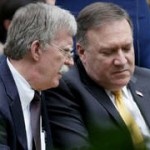 U.S. Pushes Confrontation with Iran: Trump Warns of “Consequences,” Pompeo Likens Leaders to “Mafia”
President Donald Trump lashed out at Iran Sunday, warning he was prepared to unleash dire “consequences” on Iran if its president threatens the United States again. Trump’s threat came just hours after Rouhani’s speech earlier Sunday, in which the Iranian president warned the U.S. about pursuing a hostile policy against his government. Meanwhile, Secretary of State Mike Pompeo gave a speech Sunday in which he compared Iran’s leaders to a “mafia” and promised unspecified backing for Iranians who are unhappy with their government. Pompeo spoke at the Ronald Reagan Presidential Library outside Los Angeles. “This is not an administration that is pursuing a policy of actually trying to find a way to the negotiating table or striking a new deal,” says Trita Parsi, founder and president of the National Iranian American Council. “Everything they’re doing right now is only compatible with a policy of confrontation.”

Kings Bay Plowshares: Meet Two of the Seven Activists Who Secretly Entered a Nuclear Submarine Base
On April 4, 2018—the 50th anniversary of Martin Luther King’s assassination—seven Catholic Plowshares activists secretly entered Naval Submarine Base Kings Bay in Georgia, one of the largest nuclear submarine bases in the world. They were armed with just hammers, crime scene tape, baby bottles containing their own blood, and an indictment charging the U.S. government for crimes against peace. Their goal was to symbolically disarm the nuclear weapons at the base, which is home to at least six nuclear ballistic missile submarines. Each submarine carries 20 Trident thermonuclear weapons. The activists said they were following the prophet Isaiah’s command to “beat swords into plowshares.” It was the latest of 100 similar anti-nuclear Plowshares actions around the world beginning in 1980 in King of Prussia, Pennsylvania. The first Plowshares action in 1980 was led by the late Daniel Berrigan and Phil Berrigan. Phil’s wife, Liz McAlister, was one of seven arrested at the April 4 action. McAlister and two other activists, Jesuit priest Stephen Kelly and Mark Colville, remain locked up in pretrial confinement in Brunswick, Georgia. Four others—Patrick O’Neill, Carmen Trotta, Martha Hennessy and Clare Grady—are under house arrest. All seven could face years in prison, if convicted. We speak with Martha Hennessy and Carmen Trotta. Hennessy is the granddaughter of Dorothy Day, the founder of the Catholic Worker movement. Carmen Trotta helps run the St. Joseph Catholic Worker House in New York.

Advocates: Israel’s Jewish Nation-State Law Constitutionally Enshrines Racism Against Palestinians
A fragile ceasefire remains in effect after four Palestinians and one Israeli soldier were killed during violence Friday along the border with Gaza. During the flare-up, Israel launched dozens of strikes it said were targeted at Hamas rockets and mortars. The death of the Israeli soldier was the first since Palestinians launched weekly nonviolent protests at the border in March. Israeli forces have shot and killed at least 140 Palestinians during those protests, while wounding thousands of others. This comes as Israeli lawmakers drew condemnation Thursday for passing a law that defines Israel as the nation-state of the Jewish people and gives them the sole right to self-determination. The law declares Hebrew the country’s only official language and encourages the building of Jewish-only settlements on occupied territory as a “national value.” Yousef Munayyer is executive director of US Campaign for Palestinian Rights. Rebecca Vilkomerson is executive director of Jewish Voice for Peace. She co-authored a new op-ed in The Independent headlined “As Jews, we reject the myth that it’s antisemitic to call Israel racist.”