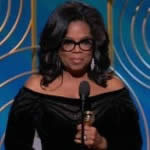 Watch Oprah Winfrey’s Powerful Lifetime Achievement Award Acceptance Speech at Golden Globes
Hollywood actors and actresses celebrated the #MeToo movement and demanded gender and racial justice at Sunday night’s Golden Globe Awards. Many attendees answered the call to wear black and wore pins that read “Time’s Up!” On Sunday, Oprah Winfrey made history by becoming the first African-American woman to win the Golden Globe lifetime achievement award. The first African American to receive the honor was Sidney Poitier in 1982. During the ceremony, Golden Globes host Seth Meyers joked with Oprah, suggesting she should run for president. The joke, and Oprah’s powerful acceptance speech, fueled a wave of speculation and enthusiasm about a possible 2020 bid by the actress. In response, Oprah’s longtime partner Stedman Graham said, “It’s up to the people. She would absolutely do it.” We air Oprah’s acceptance speech, as well as speeches by Golden Globes host Seth Meyers and award winners Nicole Kidman and Laura Dern of “Big Little Lies,” Elisabeth Moss of “The Handmaid’s Tale,” Frances McDormand of “Three Billboards Outside Ebbing, Missouri,” and Sterling K. Brown of “This Is Us.”