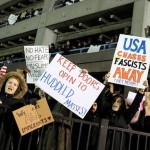 Thousands of protesters flooded airports across the United States over the weekend after President Donald Trump signed an executive order Friday temporarily banning all refugees from entering the country, and barring access for 90 days to nationals from seven majority-Muslim nations.

Thousands of protesters flooded airports across the United States over the weekend after President Donald Trump signed an executive order Friday temporarily banning all refugees from entering the country, and barring access for 90 days to nationals from seven majority-Muslim nations. The draconian measure instantly cut off access to the U.S. to 218 million people from Iran, Iraq, Libya, Somalia, Sudan, Syria and Yemen. It indefinitely suspended the admission of Syrian refugees. Across the world, travelers were left stranded, while scores were detained by customs officials after landing at U.S. airports. As news of the order spread on Saturday, thousands gathered at John F. Kennedy airport in New York City for an impromptu protest. On Saturday, Democracy Now! spoke to protesters at JFK.

Sudanese Stanford Ph.D. Student Speaks Out After Being Detained at JFK Under Trump Muslim Ban
Nisrin Elamin is a Ph.D. student in anthropology at Stanford University and a Sudanese citizen. Last week, she was attempting to make it back to the United States before Donald Trump signed an executive order barring immigrants from Sudan and six other nations. She missed a connecting flight. By the time her plane landed at JFK on Friday, the order was in effect, and she was detained. She describes what happened next.

ACLU: We Have Won the First Victory to Overturn Unconstitutional Muslim Ban, But Fight Continues
President Trump’s immigration order drew immediate legal challenges. On Saturday, the ACLU asked a federal judge to intervene in the case of two Iraqis detained at JFK airport. On Saturday night, U.S. District Judge Ann Donnelly in Brooklyn ordered the men released as part of a nationwide stay on part of Trump’s executive order. Her ruling temporarily blocked the deportation of valid visa holders, including those from countries listed in Trump’s ban. In Boston, Carl Williams, a lawyer from the ACLU, announced the legal victory while standing in front of hundreds of protesters at Logan International Airport. Judges in California, Massachusetts, Virginia and Washington quickly followed with similar rulings, and the Department of Homeland Security said on Sunday it would comply with the orders. But some lawmakers report Customs and Border Protection officers are defying the courts.

NYC Taxi Drivers Stage Airport Strike to Protest Trump’s “Inhumane & Cruel” Executive Order
President Trump’s immigration order prompted the New York Taxi Workers Alliance to halt rides from JFK airport Saturday night between 6 and 7 p.m. In a statement explaining the one-hour strike, the alliance said, “Drivers stand in solidarity with refugees coming to America in search of peace and safety and with those who are simply trying to return to their homes here in America after traveling abroad. We stand in solidarity with all of our peace-loving neighbors against this inhumane, cruel, and unconstitutional act of pure bigotry.” Meanwhile, the ride-sharing service Uber faced an online backlash for refusing to honor Saturday’s strike. Hundreds of people shared screenshots of themselves deleting the Uber app from smartphones, as the social media hashtag #DeleteUber trended worldwide on Sunday.

Hundreds of Texas Muslim Leaders Receive Alarming Survey Investigating Their Views on Islam
In Texas, hundreds of Muslim leaders received letters this month ordering them to complete a survey stating their views on Islamic extremism. The inflammatory three-question survey asks leaders to state whether they believe the Muslim Brotherhood is a terrorist organization, whether they would sign a pledge for religious freedom and if they support the Muslim Reform Movement. It’s part of a campaign by Texas state Rep. Kyle Biedermann to expose what he calls “radical Islamic terrorism in Texas.” Muslim leaders say it’s the latest Islamophobic attack in a state that has seen a spike in hate crimes since the election of Donald Trump—including a weekend arson attack that destroyed a mosque in Victoria.