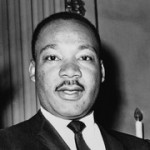 In a Democracy Now! and Pacifica Radio Archives exclusive, Amy Goodman plays a newly discovered recording of Dr. Martin Luther King Jr. On December 7, 1964, days before he received the Nobel Peace Prize in Oslo, King gave a major address in London on segregation, the fight for civil rights and his support for Nelson Mandela and the anti-apartheid struggle in South Africa. The speech was recorded by Saul Bernstein, who was working as the European correspondent for Pacifica Radio. Bernstein’s recording was recently discovered by Brian DeShazor, director of the Pacifica Radio Archives. You can view the full transcript here.

MLK Day 2017: Mobilizing Against Racism, Capitalism and Militarism in a Neo-Fascist Era | Truthout
Asha Rosa Ransby-Sporn looks at how the history of the civil rights movement has been essentially (so to speak) whitewashed, and why this is important. “In 1967, King named racism, capitalism and militarism as the “three evils of society.” In this moment, we have a similar responsibility to name and connect how larger structures are behind the impacts people feel and will increasingly feel in their daily lives. Pursuing incremental reforms rather than structural transformations is no longer going to be a feasible strategy, nor has it ever been enough.”

Donald Trump Has Some Colorful Friends | The Resistance
“Of all the Trump problems this, perhaps, is the least important, but perhaps the most symbolic.” Keith Olbermann looks at a still from a Palm Beach Daily News video of Trump’s New Year’s Eve bash. It shows the President-select with Joseph Cinque, otherwise known as “Joey No-Socks,” who is apparently a “dear friend” of the Trump family.